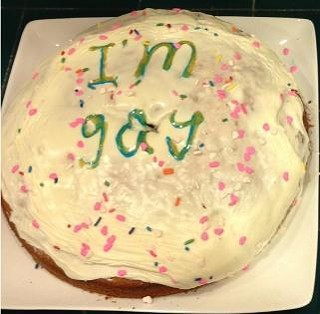 If I knew you were coming out, I'd've baked a cake (by gawker.com)

Terry Jones plays with matches, Lady Gaga slides down the bell curve, and the AGLPF turns it out. Last night, today’s AggreGAYtor dreamt of San Pedro.

• Bullied gay Oregon teen Jadin Bell has been taken off life-support after his attempted suicide.

• Anti–LGBT Romney surrogate (gross) Bay Buchanan has given up politics for real estate – where she is sure to never, ever, ever run into any gay people.

• Ex-gay therapist Anthony Duk may not have actually converted anyone; but, let’s face it, his clients were kind of half-assing it.

• Hoosiers might want to take some pointers from Nebraskans, who have introduced a slate of LGBT-friendly bills. Nebraska also produces a lot of corn, which is delicious in almost any salad.

• The Southern Baptist Convention, a group of rabid proselytizers cloned from one of Conway Twitty’s chest hairs, have threatened to pull funding if the Boy Scouts go gay.

• Pastor Terry Jones, last seen torching the Quran, has taken to building effigies of President Obama and Secretary Clinton. He would be really popular at Burning Man if he would just lighten up a bit.

• A new study has found that out gay men and lesbians are way happier than straight men. Obviously, this has something to do with Axe body spray. The poor dears must have a constant headache.

• I can’t decide if Panetta would be better with a dab of cranberry mostarda or a generous drizzle of crème anglaise. In any case, senators want him to do stuff.

• Episcopalian priest John Cornelius has turned to celibacy to protest his liberal denomination, a decision that has had zero ramifications on Mrs. Cornelius.

• In tech news, gay Square COO Keith Rabois has resigned due to charges of sexual misconduct.

• Although I agree with his criticism of Chris Christie, Facebook co-founder and New Republic publisher Chris Hughes just seems like a little twerp. Like, I just want to see him and Tucker Carlson battle it out in the Thunderdome.

• New York police suspect that gay Queens teacher David Rangel may have met his murderer on an online hook-up site.

• The National Organization for Marriage have announced a Washington march in support of Prop 8, where we can finally assess which of the One Million Moms is the MILFiest. I bet it's Agnes.

• Finnish media giant Kai Telanne, who is like Rupert Murdoch but with way better sweaters, has been fined for being a big jerk.

• Perhaps worried that last year’s Madonna half-time performance sullied their reputation of being not so friendly to gays, the NFL has booked a baker’s dozen homophobic acts to kick off the Super Bowl.

• Today in vowels – Ronaiah Tuiasosopo, the, um, “mastermind” behind the Lennay Kekua hoax has admitted that he was in love with Manti Te’o.

• If this was the nineties and I was on Total Request Live, I would cue up this video, and then tell Carson Daly to suck it.

• Cher may have had “Believe”, Tina Turner may have had “What’s Love Got to Do with It,” but the Austin Gay and Lesbian Pride Foundation really know how to make a comeback. At the recent regional conference of the International Association of Pride Organizers; they were voted organization of the year, despite not actually being members of that organization. I believe that’s what they call “making them eat it.”