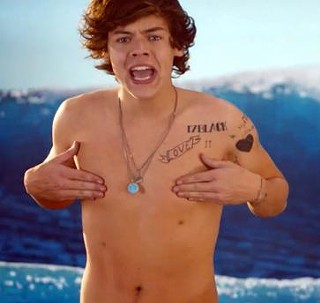 Bradley Manning catches a break, Christopher Ciccone gives some unsolicited advice, and Harry Styles connects the dots. One of the penalties for refusing to participate in politics is that you end up being governed by today’s AggreGAYtor.

• A military judge has reduced Bradley Manning’s possible sentence after ruling zhe was mistreated in custody.

• Indiana, a bitter spinster who never quite mastered simple prairie points, is not being invited back to the quilting bee.

• The National Cathedral has decided to start performing gay marriages.

• Although his local council recommended approval of his project, the chief executive will not be sending Ryan Andresen’s Eagle Scout application. For those keeping an Eagle Scout tally – that’s out LGBT members 0, mass murderers 3.

• Apparently, the text from Massachusetts’ decision to allow same-sex marriage is becoming a de rigueur reading for wedding ceremonies. I’m sure it’s lovely, but I think I’ll stick to my plans to cull my vows from Texas penal code §22.011 (a)(2).

• According to the Advocate, “fabulous shopping” and concerts by the cast of Glee trump actual quality of life for LGBT people. And Salt Lake City gayer than Austin? Pshaw!

• Given big tobacco’s well documented targeting of the LGBT community, the CDC’s recent counterweight is definitely a good thing. I just wish they could have come up with something a little more elegant than rainbow letters. Ad agencies seem to think we’re all a bunch of Lisa Frank sticker collecting tweens.

• A fire at the LGBT-inclusive First Unitarian Universalist Church in Hillcrest may be a hate crime. Or it may be an accident. Or some fire juggler may have wandered by while practicing for Burning Man. Who knows? I'm not going for the Pulitzer here.

• The national offices of the Stonewall Democrats has shuttered due to lack of funds.

• Jeanne Manford, legendary ally and founder of PFLAG, has passed at 92.

• The North American Old Catholic Church has announced the ordination of a transgender priest, making it the Cinderella to the Roman Catholic Church’s ugly step-sister.

• The UK tells activist Serigne Tacko Mbengue that he has to “prove” he is gay in order to avoid deportation. It remains unclear what the “test” will be, but I am imagining the Ultimate Ninja Challenge as reinterpreted by Vivid Video.

• Oddly, a loving rendition of an all- lesbian Last Supper has not been snagged from Etsy yet. Ellen is Jesus, natch.

• It’s awfully nice that a gay couple gets to enjoy a romantic meal together in the new Crate & Barrel catalog, but I’ll reserve my triumphant cheering for the moment a same-sex couple gets to wake up rumpled in luxurious Pima cotton sheets.