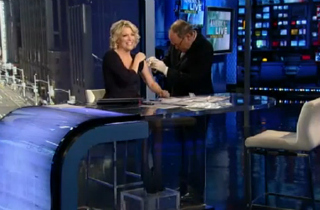 • Scandinavian death metal band SCOTUS will begin hearing arguments on the Prop 8 and DOMA cases in March. As usual, Justice Antonin Scalia will be readying an epic guitar solo that can kindly be described as “indulgent.”

• Rush Limbaugh, a squeezably soft batch of undercooked blood pudding, compares the marriage equality push to the normalization of pedophilia.

• An Alabaman student is behind bars after plotting to murder gay and black students.

• Although I agree with their basic criticism of Chuck Hagel, it's difficult to lend the Log Cabin Republicans any credence after they spent so much time dizzied by the musky delights of Mitt Romney's … umm, shall we say, "santorum?"

• Erudite Fox and Friends analyst Megyn Kelly (the “y” in her name means she’s seryous) pontificates on what it means to be “aggressively gay.”

• A Queens transgender teacher is suing Catholic school after being fired for being “worse than gay.”

• A “coalition” of African-American ministers pressure Illinois legislators to reject marriage equality; saying that while they love the sinner, they hate the idea of that love manifesting itself in anything other than seething derision.

• Michelangelo Signorile is no stranger to conflict.

• The feral jackals over at the Washington Examiner hate truth more than a Nazi.

• The American Dialect Society vote “marriage equality” as the phrase “most likely to succeed” in 2012, which is just plain #weird.

• The Church of England officially adopts “no homo” as the policy for the ordination of gay bishops.

• Meanwhile, China clears a closeted gay man of aiding in the suicide of his wife.

• Kyle XY star Matt Dallas (I know, I know, it's unnecessarily porny, but for real that’s his name) enters the homodome.

• Busy Philips, however, says that Michelle Williams and she only watch from the sidelines.

• Finally, Neil Patrick Harris will be pushing his gay agenda as the burliest straight dudes in the nation watch tight ends in tight pants compete tackle each other ritualistically – an event made not at all homotacular by a half-time Beyoncé.