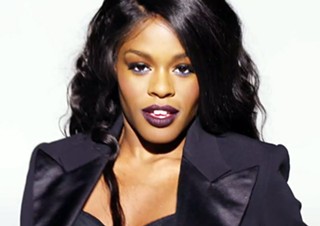 Azealia Banks can be the answer (Screen shot from 1991 Video)

Maggie Gallagher says goodbye to her English prose, Paul Ryan reveals his ENDA game, and Azealia Banks stops the music. Today’s AggreGAYtor needs you, by me, beside me, to guide me.

• Floral will-o-the-wisp Tory Burch is being sued by a bisexual African-American woman for systematic discrimination.

• Well butter my butt and call me a biscuit! Alabama Representative Patricia Todd has introduced a bill to remove anti-gay and abstinence-only requirements from state sex education instruction.

• Headline-grabbing former Navy Chaplain Gordon Klingenschmitt (you might remember him from Hogan’s Heroes) is worried that a “demonic voice” is causing Newt Gingrich to support marriage equality. It remains unclear, however, if Newticles actually knows Lady Gaga.

• Following the national trend, LGBT hate crimes are up in DC.

• In case anyone was wondering, House Republicans still have a crush on DOMA.

• All those Valentine’s cards must have made John Boehner’s photo-ops with gay reps Mark Pocan and Sean Maloney a little tense. Boehner looks as tight as a sphincter.

• A change.org petition is calling for Facebook to ban page outing gay Ugandans.

• Police in Kenya are on the hunt for a gang that has been blackmailing and raping gay men.

• Yikes! An escaped UK convict was spotted at a drag show. Luckily he did not make anyone gag on his eleganza.

• Perhaps inspired by Obama’s buck-passing playbook, Italian Premier Mario Monti says the Parliament will have to decide on same-sex marriage.

• Director Steven Soderbergh claims that his Liberace biopic was rejected by major studio heads as being “too gay.” Personally, the AggreGAYtor would like to see the list of movies rejected for not being “gay enough.”

• All three readers of Out Magazine agree that Anderson Cooper is their Man of the Year.

• Southpark creators Trey Parker and Matt Stone are both pro-marriage equality and pro-gun, opening up the tantalizing thought of a gay shotgun wedding.

• Cher might be coming to Logo. Watch your back Chad Michaels.

PS: Thanks to all the lovelies who joined K8, Andy, Rob, and your AggreGAYtor on 12th Night. This is for you,