Gay Place bloggers weigh in with individual lists: 2012 from 10 to F1 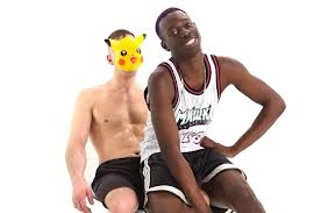 Lickity split. Queer culture accelerated to such an extent in 2012 that we may need to reset our workaday 365. Everything chugged by on chicken greased wheels; significance lost in a fog of exhaust. Vroom vroom goes virality. Vroom vroom goes calamity. What does it all mean? This checkered fag needs a pit stop.

10) Le1f’s “Wut” Video In a year where almost all pop music dreamed of electric sheep, what qualified as "queer music" got a little cloudy. If the bars play the same stuff that's played on the radio, does that make the bars top forty or the radio queer? When Gaga wears an armload of Office Depot Bravery Bracelets does she make the cut? So many questions. Even if he eschews the "gay rapper"label, Le1f is bonafied. The other guys can fill playlists with “Call Me Maybe” and “Let’s Have a Kiki.” I prefer my earworms writhing.

9) Mundo Trix’s Night of Illusions Mlle. Trix’s combination drag show and Q&A panel at Huston-Tillotson was at turns charming, touching, and revolutionary – a nice contrast to the usual stories about anti-gay bias at HBCUs. Drag momma Althea Trix and grandmomma Kelly Kline must be so proud!

8) Bettie Naylor Street: I can think of no tribute more fitting for the woman who paved the way.

7) Honey Boo Boo Maybe because her family is nothing if not intentional, maybe because her gaydar is finely honed, or because of that petal-pink pig; but I'm glued to Boo. Besides, without Alana Thompson’s GoGo Juice, I may have never known how Barbara Walters pronounces “fahts.”

6) Frank Ocean Comes Out 2012 was one big coming out party, but Frank Ocean may have had the most to lose. Instead of bowing to the homophobia of hip-hop, Ocean created his own odd future – releasing the year's best album and doing yoga with Willy Cartier. My eyes, they don't shed tears.

5) Megan Rapinoe Some may accuse me of being the Jennifer Jason Leigh to Pinoe's Bridget Fonda, but I have no plans yet to crib her platinum mop. But in my ultimate fantasy dinner party, she's sitting next to me, mean girling Hope Solo.

3) Allied Forces: This year the bros moved beyond "no homo." Macklemore and Ryan Lewis' "Same Love" made me weep more than Steel Magnolias. Chris Kluwe introduced us all to the phrase "lustful cockmonster." And rugger Ben Cohen lent his, ahem, assets to the fight.

2) Representative Mary Gonzalez The cowboys can cry "ki-yip-pee-yi,” but we’ll still have a pansexual legislator deep in the heart of Texas.

1) Austin Pride The AGLPF slathered my sundae with dark chocolate and rainbow sprinkles, then topped it all off with some summer Peaches. I’m still licking my chops.

10) Madonna at the Super Bowl Zephyr in the sky at night I wonder, do my tears of mourning sink beneath the sun?

9) One Million Moms They hate Oreos, comic books, and Ellen – just the kind of anti-American activities that Joseph McCarthy always warned us about.

8) The Trevor Project Honors Katy Perry I'm not sure if the fine folks were just momentarily incapacitated by her candyflossed hypno-bra, but Perry's "hero" status is pretty paper thin. If you're an organization that fights LGBTQIA bullying, maybe it isn't such a good idea to fawn over a woman who taunted a former classmate with her ode to loving kindness “UR So Gay."

7) Chadgate Oh hun-tee, I'm glad that Ms. Chad has seen something more recent than The Thornbirds, those Hunger Games references got real old real fast. And her Drag Race win over Raven can only be explained by RuPaulitics.

6) United Way Cuts United Way’s cuts to Project Transitions, the Care Communities, and AIDS Services of Austin could not have come at a worse time.

5) Tastes Like Chikin In a historic year for equality, the long lines at Chick-fil-A were a sobering reminder that there is still a seething underbelly of hatred in Southern culture, deep fried and soaked in pickle juice.

4)Timothy Kurek If the road to hell is paved with good intentions, Mr. Kurek will have a hard time cleaning up all of that tar. His gaycation, in which he pretended to be gay for a year, made many in the media swoon. It just made me angry.

3)Westburied While I agree that vile may be too mild of an invective for the goon squad at the Westboro Baptist Church, I’m getting just a wee bit weary of the constant coverage of their shenanigans. By now we know that the Westbozos will never be far behind the news vans – leeching off the national attention of everything from Formula One to Sandy Hook. Sure, it’s despicable, but I can’t help thinking that it will go away the minute our nation greets them with a collective yawn.

2) Goodbye Bernadette’s The little bar with no sign was always worth finding.

1) Fake Hate Charles Dickens' supreme read still applies; the "worst of times" haunts the most effervescent moments of jubilation. Amidst all the ballyhoo surrounding our alphabet city, there was the disturbing news that anti-LGBTQIA hate crimes rose by five percent. With so much real danger, this year's trickery was even more shocking. First a lesbian couple sprayed "Kill the Gay" on their own door. Charlie Rogers upped the ante by carving "dyke" into her skin. Then a gay GOP staffer self-inflicted a kidney punch. By crying wolf, they all made it more difficult for real victims to get justice.

If Wishes and Butts Were Clusters of Nuts, We'd All Have a Bowl of Granola!

1)The Dragony and the Ecstasy Austin drag culture is experiencing such a renaissance that it's time to go big. So what if we don't have any piers, we can still have a Wigstock.

2) The Civil Rights Frontier 2012 was over brimming with victories for the “L” and the “G.” It’s high time we had some trans substantiation.

3)Keep Ya Head Up (That's Right!) I'll make a deal. The minute Queen Latifah stops being coy about her sexuality, I will film myself doing the dance from the opening credits of Living Single and post it on the blog. There is no free position, Ms. Owens.