The official, traditional kickoff to Mardi Gras comes to town 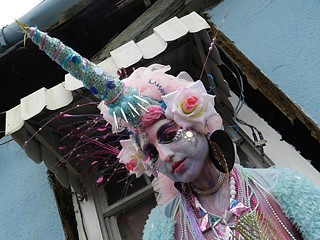 Here's a LOOK BOOK of some costuming ideas. Perhaps this gorgeous Mardi Gras unicorn will help summon your inner mythical beast? CLICK on the link above for the full gallery. (photo by KXM)

Usually, the only epiphany I have come January 5, is that the holidays are over, my coffers are bare, and it's time to get back to work – which may very well be why the Feast of the Epiphany or 12th Night is one of my favorite holidays: It's one last decadent hurrah before the year begins her grind.

In communities that celebrate Mardi Gras, 12th Night is the season's official kick-off. While Mardi Gras proper (Fat Tuesday) varies in date from year to year (as do Ash Wednesday and Easter), 12th Night is always 12 nights after Christmas. And this year, a new Austin tradition, the very first 12th Night Austin happens this Saturday, January 5.

12th Night (in Christian religions) commemorates the visit of the Biblical Magi to the little baby king. The Magi are the dudes most of us know as the Wise Men or Three Kings. The timing of the fest coincides with the wrap of the winter solstice and the hint that Spring is around the corner. The Mardi Gras 12th Night is most often celebrated with elegant ball events, announcements of krewe royalty and themes for the year, and king cake, king cake, king cake. (Click here then scroll down for some great historical and cultural context.)

The evening's highlights include a Mardi Gras-style procession and coronation ball. The procession begins at Coco Coquette, 2109 E. Cesar Chavez and proceeds west at 8pm on Saturday to the Black Heart, 86 Rainey. The procession will be kid- and pet-friendly. Austin's beloved Minor Mishap Marching Band with urge and churn and toot and choogle the mass forward.

Tom Mahnke, the man behind KOOP-FM's Fais-Do-Do radio show will spin all sorts of Louisana goodness: Cajun, brass band, NOLA, R&B, Zydeco, etc. Devaki Knowles (Fun Loving Photos) will capture your look in her faboo photobooth. And the 12th Night gang has presented a list of five "couples" nominated for Austin's first ever King & Queen of 12th Night. (Full disclosure: I have been nominated for King with Rebecca Havemeyer as Queen!)

While you needn't be in a formal krewe (or group or gang), many local ones are forming now. In fact, the Gay Place Krewe is alive and has decided on a theme for costuming that is very minimal (with the opportunity to go maximal, for those so inclined). It is a secret (Mardi Gras Krewe themes traditionally are…), but if you are interested in rolling with us, send an email to gayplace@austinchronicle.com, and we'll forward our Facebook invitation to you for our walking group. We need wild costumers as well as supporters and Gay Place/Chronicle sign carriers, etc.

Costuming is encouraged but not required. The gallery above is a veritable "Look Book" of Mardi Gras ideas, as are some links to some previous blog links below. Hope to see you out at 12th Night!