GP Crush of the Week

PINK ♥s Consent is an inspiration. 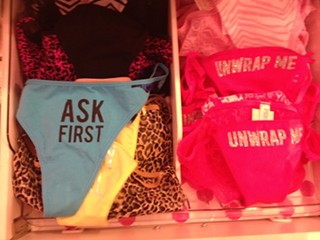 The linked website features a variety of panty styles emblazoned with slogans that bring awareness to rape culture, worn by models of various body shapes and skin tones – in sharp contrast to the parade of photoshopped white women used in VS photos.

This week, their brilliant idea is going viral. With a little bit of help from their friends, consent themed panties are popping up at Vickie’s stores throughout the US. Although the group is not able to sell the panties due to legal concerns, there is nothing stopping them from mixing in a few homemade pairs into the bins at the mall. The action is easily repeated, allowing anyone with a few iron-on letters to spread the message.

The message could not be any timelier. Our jocular popular culture, with its tendency to mistake shock for comedy, treats rape culture as if it were a distant memory. Over the summer Daniel Tosh heckled an audience member at L.A.’s laugh factory by saying “wouldn’t it be funny if that girl got raped by like, 5 guys right now?” Just this month webcomic The Oatmeal featured a panel laughing that “every time the Internet does not perform as expected, I rape the shit out of my F5 key.” Worse yet, from Reditt to Gawker, any discussion about the inappropriateness of rape jokes gets quickly derailed by commenters decrying the “PC Police.”

But denouncing rape culture has nothing to do with political correctness. It has everything to do with respecting women’s (and men’s) ownership over their own bodies, despite those bodies being commoditized in everything from Maxim to girl’s clothing. In LGBT communities, that has extra resonance in a community where rape is used to assert power over our sexual orientation and gender identities. Denouncing rape culture respects the more than 200,000 victims of sexual assault (in the US alone) each year. Denouncing rape culture gives power to the more than 50% of victims whose assault is unreported for embarrassment of fear. FORCE gets that. And that’s why we ♥ FORCE.