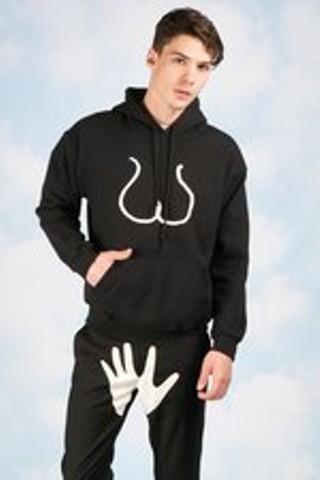 As Gregor Samsa awoke one morning from uneasy dreams, he found himself wearing a testicles hoodie (by openingceremony.com)

• The AggreGAYtor’s frusen glädjé heart is warmed by the thought that at this very moment Ruth Bader Ginsburg could be looking Antonin Scalia dead in the eye and saying “you, sir, are an ass.”

• The Alabaman lesbian attacked on Thanksgiving weekend is denying that the crime was motivated by hate.

• A third man has come forward with allegations that Kevin Clash cannot resist putting his hands in underage pockets.

• Transgender lawmaker Stacie Laughton may or may not be resigning from office after revelations of criminal past.

• A judge in Nevada thinks that gay marriage will discourage straights from getting married, because apparently all straights are four year old brats who don’t want you to play with their toys.

• Tony Perkins of the Family Research Council has a boner for Uganda’s “kill the gays” bill.

• The Advocate ruefully failed to include your AggreGAYtor in its round-up of queer mustaches. I’m totes more famous than C.P. Cavafy.

• Just as the religious right had swallowed enough Paxil to make it through the November election queerstravaganza, a highly contested Californian election is called for lesbian Cathleen Galgiani.

• Rick Joyner, a hungry polar bear whose last salmon was stolen by a crafty gay penguin, warns that soon America will be banning heterosexual marriage.

• All that time spent supporting marriage equality is really paying off for punting inamorato Chris Kluwe. The dude can now read like Jujubee.

• The New Yorker’s proposed LGBT agenda for Obama’s second term is all well and good for those who read the “T” in the acronym as “take no notice.”

• The AggreGAYtor has remained silent as fashion has devolved into a series of increasingly ridiculous portmanteaus. But “meggings?” Seriously? If "mankercheifs" are next, so help me gawd.

• It’s hard for me to criticize Secretary of Radness Hillary Clinton, what with all her booty shaking and meme pwning, but a speech about LGBT inclusion in US foreign policy might have profited by a mention of Uganda.

• Today in conversion therapy, in which gay men are encouraged to participate in dry, sexless, talky circle jerks, New Jersey group JONAH is being sued for fraud.

• Speaking to CNN, JONAH co-director Arthur Goldberg says they will keep trying to swallow that whale.

• Meanwhile Jackie Speier: California Congresswoman (coincidentally the name of a short-lived syndicated drama) is looking to ban conversion therapy in her state.

• And Dr. Mehmet Oz, the great and powerful, gives credibility to ex-gay movement on an episode of his blather fest.

• Sandy Rios, the world’s only living advocate of the “Rachel” haircut, declines to live next to brothels, abortion clinics, and gay folk.

• Russia is mulling over federal law to ban gay things, news that was not met with approval from Moscow’s bear community.

• After spending Thanksgiving cooking up moral pies, One Million Moms wake from their tryptophan highs to condemn a lesbian character on CBS’s “Person of Interest.”

• OMM’s sugar-daddies at the National Organization for Marriage may have to forgo going to Jared for their boycotting babes after being fined for campaign ethics violations. Side note: NOM prez Brian Brown is getting dangerously close to looking like Chris Farley in Black Sheep.

• Of all the low-down, dirty, mean things that thieves can do, stealing clothing donation and basic hygiene survival packs from LGBT homeless youth is in the top echelons.

• A Michigan teacher is suspended without pay for allowing a student to play Macklemore and Ryan Lewis’ highly controversial hit about treating gay people decently.

• Angus T. Jones, biter of the hand that feeds and doppelganger dater, is being spiritually advised by a homophobic, illuminati conspiracy theorist. Quoth the half man: “"I see this guy and I'm like, dang, man of God."

• San Antonio pastor John Hagee, a lumpy bowl of Malt-O-Meal left to cake in the morning sun, is worried about America’s flower.

• Perhaps one of Hagee’s followers is responsible for carving gay slurs on a SA lesbian couple’s apartment doors.