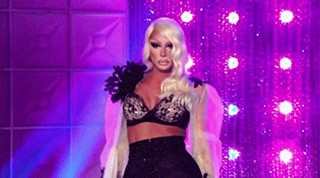 Susan Boyle gets kinky, Chelsea Clinton is silenced, and RuPaul makes a decision. Today’s AggreGAYtor is jealous of your boogie.

• Which hopefully was not what the owners of a Montreal Gay Village apartment had in mind when stocking up on dynamite.

• Withered vine fruit Linda Harvey compares wearing pro-equality t-shirts to bullying. Judging by Harvey’s wardrobe, this may be just jealousy that gay t-shirts are printed on luxurious 100% cotton. It must be hard looking at comfortable knits when all of your suits are cobbled together from left over Domino’s boxes.

• Speaking of suggestive acronyms, RuPaul chose Chad Michaels over Raven in the Drag Race: All Stars finale, which is sort of like choosing a soggy slice of Wonderbread over a chocolate croissant.

• The Associated Press style guide has officially nixed the use of “phobia” in a social or political context. In the spirit of journalistic professionalism, I will now refer to homophobes as jackasses.

• A Libyan militia is set to execute twelve men perceived to be gay.

• The New Hampshire GOP is calling for Stacie Laughton, the first openly transgender candidate elected to state office, to step down over newly discovered criminal history.

• LGBT activists have taken umbrage at Amnesty International for implying that homosexuality is a choice.

• America Blog is asking its readers to print pro-equity vouchers to place in the Salvation Army red kettle in lieu of donations. I guess it’s more effective than dirty looks, but I really like giving side-eye.

• It’s all well and good that Morgan Freeman is lending his gravitas to a HRC marriage equality video, but it would be a gas to see a gay person in one of those ads. Just for the lulz.

• Dolly Parton looks into our eyes and lies those pretty lies and pretty soon we’re wonderin' how we came to doubt her.

• A Maine judge has ruled that prohibiting a transgender student from using the girl’s restroom was not discrimination.

• A Fort Worth woman is filing a human rights complaint after being kicked out of Dollar General store for gender identity.

• Carnival Cruises has rupaulogized and reversed its previous decision to ban drag on Drag Race cruise after heavy criticism from community. One of the Gay Place’s favorite drag artists Bulimianne Rhapsody (nee Jualdo Vielma) will be on deck to stir things up. We want pictures!