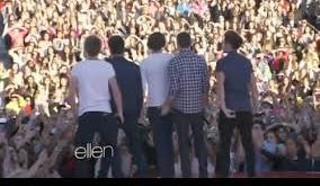 One Direction lives while they're young (Screen shot from Ellen)

Liam Payne spreads his digits, Franklin Graham thinks about ones and zeroes, and Sheldon Stephens makes another calculation. Today’s AggreGAYtor is crunching the numbers.

• I know we homos relish our amazing powers to bring about disasters, terrorism, and war; but honestly the clip of our mischief is starting to get exhausting. Did we really have to create the Petraeus scandal too? The world is not our personal soap opera.

• I wonder why evangelicals like Franklin Graham always call genitals plumbing when trying to take down the gayz. I know the world of pipes and drains is rife with innuendo, but their wives have to find their pillow talk as sexy as caulk.

• Pity the National Organization for Marriage, those earnest Van Helsings to secular America’s demon hordes. 2012 is ending as a bummer. Donations are dropping and they aren’t getting as many “likes” as they used to. It must be like living in Teen Witch in reverse.

• Speaking of…the photo of Orange County NOMarch John Eastman accompanying the linked article about slippery financial disclosures is just killing me. He looks like he spent hours practicing his surprised face. Someone give this man a daytime Emmy.

• The supply-side sweethearts at GOProud are using the Twinkie shuttering to raise money. Too soon, guys, too soon.

• Only in America’s heartland can a story about a high school gay-straight alliance lead with “it starts with a snowplow blade.”

• The French just do l'homophobie better than us ugly Americans. Their anti-marriage equality efforts have color coordinated pageantry!

• Although in fairness to American right wingers, stateside protests rarely devolve into violence.

• Q: Why do math teachers talk to themselves? A: They think the students are listening.

• British moppet Jaymi Hensley of Union J continues the fine tradition of being “the gay one” in a boy band.

• Speaking of raging hormones, here’s One Direction’s Liam Payne lovingly caressing the unreasonably popular buttocks of band mate Harry Styles. Also, is it a requirement that boy ban members have a "y" in their name?

• Elmogate continues to rage on with Sheldon Stephens welshing on his previous welsh about when he began his relationship with Kevin Clash It’s all very confusing and I wish Big Bird would explain it to me.

• Several stories of anti-LGBTQIA crimes erupted over the weekend. In Tennessee, a gay man was battered in his homeless camp.

• The Lower Moreland Township in Pennsylvania was grafittied by gay slurs.

• And a University of Virginia student was attacked on campus in possible hate crime. It’s not all bad news though. The Mennonite pastor who kidnapped a lesbian’s daughter to deliver her from sin is about to be sentenced. That will be fun!

• And the West Virginia woman whose job offer was rescinded after bosses discovered she had a female partner was victorious too.

• Somehow this slipped past our gayday, but the Pflugerville ISD is now offering pfbenefits for unmarried partners. Pfucking A!