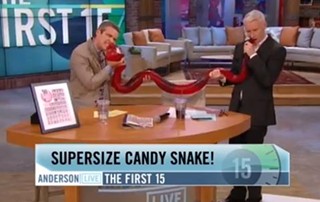 • Every so often the AggreGAYtor likes to browse the conservative web. It’s like dropping acid, except the blotter paper is usually plain and white.

• Need more proof that conservatives are stuck in a bad trip? Here’s NOM numbnut Thomas Peters blathering about how recent gay marriage wins actually show his side is gaining traction.

• Today in creepy: Mark Guenther, the executive director of D.C.’s gay and lesbian chamber of commerce, was arrested for breaking into neighbors house and watching him while he slept.

• LGBT persecution continues to be a problem in many African countries. A bill punishing homosexuality with jail time is near passage in Nigeria. The Sudanese government is stoking hate by blaming AIDS on gay teen sex.

• MassResistance’s Brian Camenker says that in communist Russia, gay wears you. Or something of that sort. He really should put a little more flair into his homophobia.

• Freedom to Marry prez Evan Wolfson is taking credit for Maryland marriage equality win, much to the chagrin of local activists.

• Much like The Ring’s Samara, Illinois Family Institute head Laurie Higgins travels from thumbnail to thumbnail making a drippy mess of the nation’s interwebs. Oh, and she also beats the drum for trans bullying.

• Minnesota’s Anoka-Hennepin school district, the setting for Sartre’s “No Exit,” has pissed off a bunch of parents.

• Also in the land of cheese and honey, a Catholic priest refuses confirmation of teen parishioner for supporting same-sex marriage. That's no Gouda.

• Big brown may have broke things off, but the Boy Scouts can still expect plenty of necking from the Family Research Council.

• Ex-Navy Chaplain and recreational exorcist Gordon Klingenschmitt equates marriage equality support to the crucifixion, which means that in thousands of years little old ladies will be wearing little Facebook icons around their neck. The future is weird.

• Sure, The HRC corporate equality index is valuable; I just wish it had a little more pizzazz. Now that corporations are people, it would be nice to see Playboy-style centerfold mini-bios of all the companies. I just know General Motors enjoys long walks on the beach.

• All those Jodie Foster seminars are finally paying off for J. Crew style wizard Jenna Lyons and girlfriend Courtney Crangi.

• Meanwhile, Courtney’s seriously smoking brother Philip Crangi poses with 99 other LGBTastemakers for Out Magazine’s Out100 ballyhoo.

• Uruguay becomes the latest country to consider same-sex marriage. The United States continues to be the international community’s prudish aunt who wears novelty cardigans and jumpers to holiday parties.

• In the wake of Obamarama, new nations are being formed daily.

• I suppose I can understand why good ole Mark is clenched tighter than a cremaster muscle. Apparently, UT has turned into a roadhouse brothel.