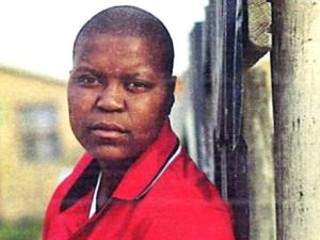 Sihle Sikoji was speared to death in South Africa (by iol.co.za)

Allen West refuses to give in, Elton John adds to his collection, and Queen Latifah may be ready to divulge her secrets. In a 90’s kind of world, today’s AggreGAYtor is glad its got my girls.

• Speaker of Parliament Rebecca Kadaga promises passage of the “kill the gays” bill by December as a “Christmas gift” to Ugandan Christians.

• This naturally made her the perfect choice to head a human-rights conference in London.

• It is worth mentioning again that the American religious right is complicit in anti-LGBT sentiment in Africa, sentiment carried to bloody extremes on a weekly basis.

• The sore losers at the National Organization for Marriage plan to retaliate against Starbuck’s for support of marriage equality.

• The AggreGAYtor is kinda with Sinéad O’Connor on this one.

• French mayor cancels same-sex wedding after being threatened with violence.

• It’s good to see Christians and Muslims uniting together for comm…wait, that’s not good at all.

• The art of graceful defeat: GOP edition. Allen West refuses to admit lossin Florida, bizarrely explaining “I know you are but what am I.”

• And Maine equality foes believe if at first you don't succeed, set yourself up for a humiliating crushing.

• Number crunchers think that the LGBT vote might have put President Obama on top in Florida.

• GOProud garden slug Jimmy LaSalvia laments that Republicans did not do a good job of reaching out to LGBT voters. To be fair, Mitt Romney did offer to draw a map of his top ten Massachusetts glory holes, but that's just not enough for today's electorate.

• Denmark’s Odense Zoo is passing out cigars to celebrate two male King Penguins becoming fathers. While the AggreGAYtor admits that encouraging penguins to smoke is probably not a good idea, it would still be cute to dress them up as tiny Don Corleones.

• Never ones to miss a trend, Madonna fan club president Elton John and hubbie David Furnish are having another baby.

• Florida teacher is investigated for turning student into a lesbian. Assumedly the teacher did so by showing her photographs of Megan Rapinoe, Queerlandia’s Minister of Conversion.

• I hope the reports that Queen Latifah plans to come out on her talk show are true. I also hope that she does it by reworking the lyrics to the “Living Single” theme, but that seems far more unlikely.

• Seattle Sounders defender Marc Burch is fined for using unspecified gay slur. He probably said "fag," but wouldn't it have been more fun if he said "sperm burper?" No?

• Oregon is slated to become the next state to take up marriage equality debate.

• Speaking of the weird and wonderful world of Roger Ailes, Shephard Smith may be the Neo of the Fox News machine – except, you know, he obviously took the orange pill. Whawhawaaaaaaaa.

• Writer and activist Brandon Lacy Campos has passed at 35.

• Conservative blogger alleges he was fired for pro-marriage equality editorial.

• Flowbee whisperer Robert Pattinson will consider a new Twilight movie if Edward is made even more sparkly.

• Being a friend of Dorothy is not without its privileges.

• AISD cancels performances of UT adaptation of “And Then Came Tango” due to concerns that student’s may embrace tolerance.