Your minute-by-minute dose of election news 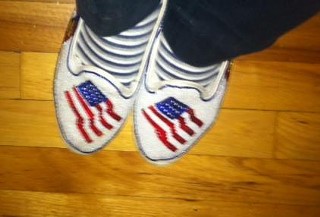 All the shoes that fit

Barack Obama is playing a pick up game, Mitt Romney is polishing his gears, and the AggreGAYtor is doing shots. Part one is taking a look at exit poles.

• 6:05 And we're off. Wolf Blitzer is looking furtively at a giant iPad on CNN. Rachel Maddow is waving a pen on MSNBC. I'm fortifying my stomach with shredded wheat. It's going to be a long night.

• 6:30 Exit polls in North Carolina are split down the middle. Obama is slightly up in Ohhhh-hiii-oooooo.

• 6:33 CNN is calling their giant iPad a "magic wall." Wolf Blitzer is wearing a pentagram tie.

• 6:41 Watching the small states come in for Romney is really stressful. My cable feed is being remixed by Skrillex.

• 6:45 CNN has called South Carolina for Mitt Romney but filled in the map with blue. Much like David Bowie in Willow, the magic wall lies.

• 7:20 Ventriloquist dummy Connie Mack has been defeated in Florida. One anti-LBGTQIA candidate down!

• 7:51 15 year old paperboy Josh Mandel is lagging in the double digits in Ohio. Two down.

• 7:57 Anderson Cooper is getting visibly irritated at Wolf Blitzer. Good thing there's a magic wall between them.

• 8:17 I swear to god if I have to stay up until midnight, I'm going to be so pissed at Mitt Romney

• 8:38 MSNBC has called Wisconsin for Obama. Tammy Baldwin and Tommy Thompson are neck and neck.

• 8:45 The marriage equality initiatives are leaning towards wins in Maine and Maryland. The gay marriage ban is losing in Minnesota.

• 8:46 Cosmo coverboy has been defeated by Elizabeth Warren. That's three. Richard "rape is God's plan" Mourdock has also been defeated.

• 8:52 Florida is close, but most of the uncounted votes are in J. Lo country.

• 9:02 Facebook is blowing up with a Tammy Baldwin win but both CNN and MSNBC show her behind.

• 9:14 Neither Pete Hoekstra and Todd "legitimate rape" Akin will be going to Washington. Five anti-LGBT candidates stay home. The Democrats retain control of the senate.

• 9:31 Gay congressman David Cicilline will be returning to Washington from Rhode Island.

• 9:41 Where are the magic Tammy Baldwin results coming from? Why does everyone on Facebook know something I don't know?

• 9:42 The mood is darkening at Camp Romney. Mittens is sitting alone smearing lipstick on his face while listening to Bauhaus.

• 9:51 CNN has turned the Empire State building into a giant veiny cock.

• 10:15 Marriage equality is still in the lead in all four states.

• 10:22 Mittens did not write a concession speech. Can't wait to here the adlib.

• I can go to sleep now. Check in with tomorrow's AggreGAYtor for the final word on the marriage equality initiatives and the final tally on all the LGBTQIA candidates (go Kyrsten Sinema!) Queers, women, and people of color dodged a bullet.