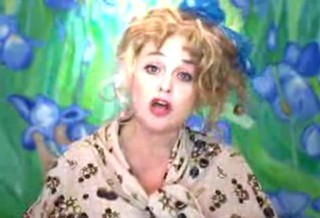 Julie Brown: Trapped in the body of a wingnut (Screen shot from youtube)

Evan Rachel Wood refuses to change, Marco Rubio does the robot, and Julie Brown takes on an eighties lady. Today’s AggreGAYtor crowns thy good with brotherhood.

• Chris Kluwe gives further fodder to those who wish he would just switch teams already.

• Things might get awkward at Ohio senate candidate Josh Mandel’s next family reunion.

• The rise in support for same sex couples can be directly attributed to the tireless advocacy work of Honey Boo Boo.

• Yes Virginia, there is a President Obama.

• Canadian LGBTQIA advocates are trying to stop the deportation of Grenadian gay man, who faces death in his home country.

• Although Evan Rachel Wood did acquire certain alchemical powers by marrying Jamie Bell, she is still not able to transmutate her bisexuality. She does, however, now have a surfeit of jewelry.

• West Seattle assailant will be charged with hate crime for beating gay man with baseball bat.

• The AggreGAYtor hopes that other 80’s comedy heroines join Julie Brown in mocking Victoria Jackson, but that’s really just an attempt to get Judy Tenuta and Rita Rudner in the same room.

• A clear majority of Grindr’s headless torsos are voting for Obama this year, which undoubtedly will cause some ruckus given several new voter ID laws.

• New York’s Ali Forney youth shelter is among the casualties of Hurricane Sandy. Sandy has officially fucked with the wrong person.

• The National Organization for Marriage backtracks on member’s recent statement that queers are “worthy of death,” clarifying that they really don’t think gays are worthy of anything.

• Faced with diminishing returns on their homophobia, wingnuts are increasingly zeroing in their hate beams on the transgender community.

• Exhibit A: Check out the tone contrast between Fox News and a local news site’s reporting of the Evergreen College transgender controversy. Disgraceful.

• Have you had lunch yet today? Has it been digested? Are you sitting? Yes, yes? OK – here’s the “unofficial” Justin Bieber sex doll.

• Despite the vocal protests of the Harper Valley PTA, the show will go on at the Wimberly Playhouse. Sordid Lives playwright Del Shores will even be on hand for a Q & A.

• Tomorrow night more than two dozen LGBTQIA organizations will be furtively watching the big screens at Rusty’s hoping they will never have to say “President Romney.”