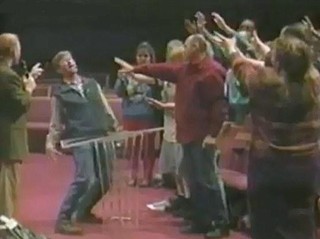 The Simpson Clan attempt to cure their father (screenshot from YouTube.com)

Teresa Giudice hangs out with her girls, President Obama makes an announcement, and Mitt Romney goes cottaging. Today’s AggreGAYtor is an October surprise.

• Despite earlier denials, the Log Cabin Republicans did indeed clandestinely meet Mitt Romney to discuss ENDA and Endora. No word on whether or not poppers were involved.

• Perhaps Mittens regaled the Babysitters Club with stories of how he bested Ted Kennedy in the gay rights department by denying birth certificates to children born of gay parents. Hahaha. Mitt and his hijinks!

• Predictably, Bryan Fischer had a Twitterfit in response to Mitt’s excellent adventure.

• A group of nanas wearing polyester pant suits decide that Boca Raton gays might want to have employment protections.

• Turns out Rhoda Penmark really hates marriage equality. It probably has something to do with all the medals we have.

• For instance, tasering homos might be considered a no-no.

• The Ruth Institute - who make marriage cool with things like pogs, Aaron Carter posters, and Cross Colors – want you to know that conversion therapy is phat.

• Alveda King, who misheard uncle Martin Luther King’s “I Have a Dream” speech as “I Have a Beef,” thinks gays are going to hell. The AggreGAYtor can’t help thinking how better her life would have been if her folks just bought her that hearing aid.

• Much like Regina George, Chick-fil-A becomes more popular the more awful they are.

• Just look at all the polyunsaturated pilgrims.

• The Williams Institute proposes that LBGTQIA support may push Obama to victory.

• Wisconsin Gaypublican campaign worker alleges he was assaulted at his house for his sexuality and conservative beliefs.

• Focus on the Family has so much fun converting gays and lesbians, they want to spread the love to trans folks. Pillow fight!!!!!

• Hate crimes are up in LA County.