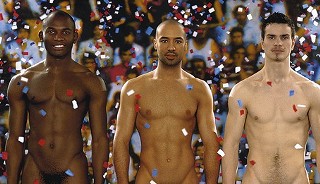 • The Log Cabin Republicans, a group of gay men who only conservatively suck dick, have given a “qualified endorsement” of Mittens – despite his support of the same constitutional amendment that cost Bush his endorsement.

• Ellen DeGeneres always checks under her bed for Mitt Romney.

• In other Ellen news, she won the Mark Twain Prize for humor. Really all awards should go to her.

• Scary Halloween costume Bryan Fischer thinks he is a prophet.

• A Duke University researcher names fern in honor of Lady Gaga. In its spare time, the bisexual plant writes middling pop music while flowering in an ever-evolving array of amorphous buds. Zuh-iiiinnnggggg.

• New Jersey lesbian couple wins fight against association that denied use of their pavilion for wedding ceremony.

• Retired Jet Kris Jenkins speaks out against homophobia in sports.

• That homophobia was particularly on display in the Twitter cesspool after the Giant’s won the National League series.

• Creepy bottle of spray-tan Joe Simpson allegedly has taken up with a twink.

• The naked men on the poster for Viennese exhibit “Naked Men” will no longer be naked, man.

• For once, straight women kiss without trying to get attention from dudebros.

• Can we as a nation just have a quick meeting to decide we are ALL over Chris Brown?

• Texas Libertarian US Senate candidate John Jay Myers is also a friend of friends of Dorothy.

• Some worry that Austin’s Prop. 3 proposed reorganization of elections would marginalize LGBTQIA voters.