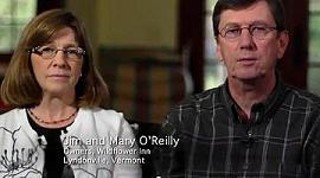 Fergie has a lesbian romp, Jan Paul is running scared, and Fred Karger is going after NOM. They say today’s AggreGAYtor is really sexy. The boys they wanna sex me.

• No good can come from bath salts.

• Hundreds of community members are expected at meeting honoring David Hernandez Barros, the East Hampton bullied teen who recently took his own life.

• North Carolina man alleges that church held him captive for four months in an attempt to drive the gay away. Also what is up with fundamentalism and big hair? Is there a Bible verse listing flat hair as an abomination before God? Did Lot’s wife turn into a pillar of salt for her refusal to use Aqua Net?

• Jim and Mary O’Reilly, who are as charismatic as the oatmeal stuck in Wilford Brimley’s moustache, star in new anti-gay marriage ad.

• Eternal American Idol Kelly Clarkson is voting for President Obama because she likes the gayz.

• Homophobic Kansas state representative Jan Paul , who looks like Patty Smith would if she spent her eighties as a Cathy-reading HR Rep, is afraid that gays are gonna get her. ACK!!

• LGBT issues continue to be the debate topic that dare not speak its name.

• Maria Alekhina and Nadezhda Tolokonnikova of Pussy Riot have been moved to remote prison colonies.

• Some folks (but not the AggreGAYtor because ew) are wondering if evangelical-cum-gay impersonator Timothy Kurek had sex with a dude during his year of gaysplotation.

• The AggreGAYtor has a sudden desire to buy towels.

• Study claims that lesbians are not getting adequately tested for cervical cancer.

• Fergie, who plays the role of Betsy Wetsy in the Off-Broadway musical “Lady Lumps”, experimented with being a daughter of Bilitis.

• Angelina Pivarnick realizes that her views on gay marriage are boring, much like her lackluster stint on Jersey Shore.

• Square faced reptilian Mitt Romney does not believe gays have the right to visit loved-ones in the hospital.

• At 8:00 PM tonight, Huston Tillotson’s LGBTQ organization Family Ties will be sponsoring a drag show on campus in response to homophobia on campus. Host Mundo Trix says he has had fierce opposition from HTU’s administration. Stay tuned to the Gay Place for more on the story.