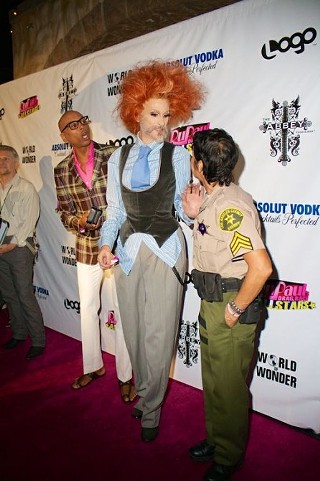 RuPaul calls in the fashion police. (by queerty.com)

• Linda Harvey, mother of the bride of Chucky, explains that Halloween’s demonic origins are the reason for its popularity with queer folk.

• For those of you who like to put faces to names, here’s Linda at a recent rally.

• Jacksonville councilman prays that god will show the “truthes [sic] of his word” after constituent criticizes anti-discrimination vote. The AggreGAYtor is not sure what “truthes” are, but they sound testicular.

• Gelled jack-o'-lantern Chris Barron defends Ann Coulter’s homophobic buffoonery by calling her a “strong ally of gay conservatives.” Sort of like how Destro is a "strong ally" of G.I. Joe.

• The Knox Trail Boy Scouts in Massachusetts think that the national office is full of it.

• An Atlanta Chick-fil-A franchisee insists that prints ad stating “only a fruitcake wouldn't love our party trays” was not a slur, has trouble explaining "Ronald McDonald is a faggot" ad.

• Speaking of slurs … , A.C. Slater drunkenly tweeted his love for Chick-fil-A while throwing back Bud Ices at the Max. Jessie Spano, making a campaign appearance, just shook her head sadly.

• Continuing out journey through the Twitterverse, isn’t it hilarious that sports fans call Alex Rodriguez "Gay-Rod?"

• There will be no gay marriages at Liberty Ridge Farm.

• Poor Arlene Marks. There she was handing out leaflets when a racist, gay Yeti just went haywire.

• In other beat down news, Atlanta Waffle House patrons stand up to homophobic patron.

• You know what really sells cell phones? Transphobia, that’s what.

LGBTQIA HERSTORY CLUB: HuffPo gets this one right.