Oops, they did it again 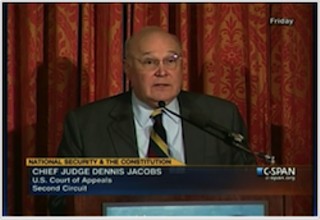 A Republican-appointed judge in the 2nd U.S. Circuit Court of Appeals has ruled DOMA unconstitutional. The chances of this hitting the Supreme Court in the next four years just multiplied. Both Republicans and Democrats believe the next President will appoint at least two Supreme Court Justices. Still don't think your vote counts?

Signed into law by President Clinton, DOMA is still alive and kicking us in the teeth 16 years later, but the 2nd Court's latest ruling has gone further than any other in declaring it unconstitutional under the 14th Amendment's Equal Protection clause. The opinion went so far as to impose "heightened scrutiny" on future anti-gay government regulations, meaning they will be presumed unconstitutional. The tide is definitely turning.

The Obama administration has instructed the Department of Justice to not defend DOMA in court, but Republicans took up the cause and spent $1 million to do just that.

Whether it's federal inheritance taxes, child custody, or hospital visitation rights, the restrictions DOMA validates go much deeper than simple legalized marriage. Those looking to start families in the next decade will have to do so with great uncertainty about what legal rights their family has. The next administration could change the direction of many lives with two simple Supreme Court appointments.

Straight from the Associated Press is this quote about DOMA and the likelihood that it will be ruled on soon by the Supreme Court:

"Ginsburg said with a smile that she couldn't answer the question. She said she could not talk about matters that would come to the court, and that the Defense of Marriage Act would probably be up soon. "I think it's most likely that we will have that issue before the court toward the end of the current term," she said."

The text at issue, for your consideration, below.

"In determining the meaning of any Act of Congress, or of any ruling, regulation, or interpretation of the various administrative bureaus and agencies of the United States, the word 'marriage' means only a legal union between one man and one woman as husband and wife, and the word 'spouse' refers only to a person of the opposite sex who is a husband or a wife." [our ital]