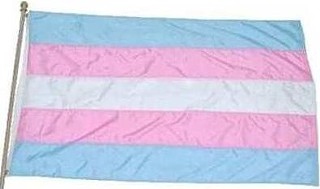 The transgender pride flag (by sfweekly.com)

Andrew Sullivan’s faith is restored, Anne Hathaway sells herself for equality, and Gavin Newsom has grave concerns. You might think I'm crazy but today’s AggreGAYtor is serious. It's better you know now.

• Rosie O’Donnell feels like the “lesbian Tom Cruise,” which hopefully means she plans to return to The View for a little couch bouncing. Barbara ought to really like that.

• LOLwork, Bravo’s reality show about ICanHasCheezburger.com plans to feature a cat-themed lesbian wedding. Perhaps its gay content supervisor will explain to the nuptial party why so many of the lulz on the Cheezburger network involve denigrating LGBTQIA and feminist communities. Hmmm? I can has issues.

• As someone who survived a very rough high-school experience, I do not wish to denigrate anti-bullying efforts, but somehow turning the Las Vegas strip into tolerance land rings a little hollow.

• HuffPo’s Allison Hope thinks it is a good thing that the debates had no mention of LGBT issues. Because the Republican’s support of constitutionally enshrining homophobia is not a big deal at all. Nosiree.

• Just ask Gavin Newsom if you need a second opinion.

• The Greeks, who invented the backdoor bump during a wonkily aimed Olympic javelin toss, are now getting squeamish over gay smooches.

• The message in NOM’s latest ad is the same ole pedophilia/ incest retread. What’s new is NOM’s ham-fisted interest in infographics. Check out the supermarket font used on “natural marriage,” because homo bonding is obvs full of preservatives and yellow #5.

• Andrew Sullivan’s crush on President Obama has been rekindled after last night’s debates.

• Isn’t it boundary-breaking that Javier Bardem is playing the new Bond villain gayish? Isn’t it just so edgy? We’ve totally never seen that.

• The UK is set to deport lesbian refugee, despite the risk of death or imprisonment in her native Cameroon.

• Castro Street merchant’s board decide they will let transgender flag fly on Day of Remembrance.

• Victoria Jackson, a partial birth abortion kept alive by the nanotechnology in her mascara, debates marriage equality with Howard Stern.

• America’s Next Top Model will be going co-ed; will not be re-titled Guys Smize.

• Reno battering is being investigated as anti-lesbian hate crime.

• Anne Hathaway will be donating some of the proceeds from her wedding pictures to marriage equality fight. Also her husband has a little Children of the Corn in him. Creepy.

• This is not LGBTQIA news per se. Or any say, really. But this is my post, dammit, and I’m going to link to Honey Boo Boo reading Christopher Walken lines because CAMP!

• Paris, Texas restaurant gets involved in the poultry wars. It's like everything named Paris is overcompensating for "gay paree" associations.

• The Texas Book Festival, to be held later this month at the Capitol, has a heaping of LGBTQ authors featured.