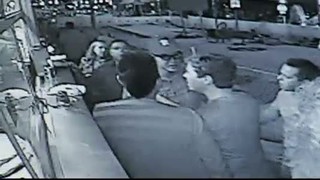 Anderson Cooper disses Star Jones, Sasha Baron Cohen rips from the headlines, and Karmin vexes the Mouseketeers. Today’s AggreGAYtor can see with all the color in the wind.

• Knockout Orlando Cruz (see what I did there) becomes the world’s first out boxer.

• In Maryland, an anti-gay marriage group makes a ruckus about star-filled marriage equality ads – then release their own celebrity commercial. I am only referring to Matt Birk’s “celebrity” in the loosest possible way. He would be lucky if he got an ad deal from a used electronics shop.

• If the queer in your life has a special occasion coming up, consider the now national Homoquotables greeting card line. It is no longer acceptable to just write “fag” after Happy Birthday.

• The Boy Scouts of America, the provider of “naughty” Halloween costumes for generations of gay men, axes another out member.

• Now that Anderson Cooper is out and proud, he has become an old pro at reading.

• While hanging with Mr. Cooper,

• This didn’t take long – the Vancouver school mentioned in yesterday’s AggreGAYtor has now agreed to apologize to bullied man.

• Speaking of moving swiftly, Sasha Baron Cohen is developing a comedy project based on recent newsblip about the Hong Kong billionaire who offered a fortune for the conversion of his lesbian daughter.

• If Disney is going to continue to profit off of homos in their annual Gay Days, maybe they ought to think about getting entertainment a bit more exciting than Florence Henderson and Karmin. Seriously Disney? Karmin? Why not just hire your next-door neighbor’s annoying daughter that goes to theatre camp every year.

• Letter to local paper claims CEO of major manufacturer passed over building HQ in Jacksonville due to city’s recent rejection of anti-discrimination measure. Although the author does not name names, documents point to the company being insulation giant Johns Manville, who are indeed land-locked in Colorado.

• The killer of Dee Dee Pearson has been sentenced to thirty years. Also, the authors of the linked Fox news report can go fuck themselves for not honoring Pearson’s identity.

• Are you a homo? Are you a geek? Get thee to Minnesota.

• OMGOMGOMG! Cher and Dion are back together wearing dresses from a totally important designer.

• The APD has released video footage of the Pride weekend attack.

LGBTQIA HISTORY CLUB: Every queer worth hir salt knows about Stonewall, but we were getting pissed long before that. In 1966, things got explosive at Compton's Cafeteria in San Francisco’s Tenderloin district. In the 60’s, even the few scattered gay bars were not welcome to transgender and gender-variant customers. Compton’s was one of the few places where they could publically congregate, but laws against cross-dressing left the cafeteria open to constant raids. On a hot August day, the harassed community fought back – leading to two days of riots. Although the transgender community lost access to the cafeteria, they did gain power. The events lead to the organization of the National Transsexual Counseling Unit, one of the earliest trans advocacy groups in the world. Learn it and learn it well.