To Zhoosh or Not to Zhoosh: aGLIFF Spiffs Up in a Word

The Polari Fest (nee aGLIFF) asks "What’s in a name?"

Sexual and gender minorities have always had a knack for language. Depending on the political climate, our labels can be potent symbols of empowerment or chilling reminders of how far there is to go. Words like “queer” became rallying cries, while “gay” sagged under the connotations of contemporary use.

Perhaps nowhere are these lingual gymnastics more apparent than with the current fascination with Polari, a working-class gay slang used in Britain from the turn of the 20th century to the 1960s. In recent years, academia has brought it back into vogue. But for decades LGBTQIA activists decried Polari as the language of the closet, a reminder of a time when queerness was defined as shame.

It is curious then, that in its 25th year, the Austin Gay and Lesbian Film Festival has chosen Polari as a new identity. The announcement was made a few weeks ago with great fanfare but little context, leaving many in the community wondering why. In announcing Polari Fest, aGLIFF focused on relevancy, but did not offer a convincing argument for how Polari is relevant today. Polari president Kodi Sawin asserts that they wanted something that said, “We’re young and hip and cool, but we understand the things that came before us – the people who did all the work.” But Polari was mostly used in Britain, with only a select few words carried stateside and even then without the formal name. To many members of Austin’s community, Polari was as meaningless as “Elantra.”

There was no denying that the board needed to roll out a new model. In 25 years, the organization had been through a handful of image shifts and a steady stream of executive directors and board members. Like many LBGT festivals, aGLIFF found the hunt for sponsors difficult. Sawin laughs. “I would have to say that nobody respected the organization anyway. The criticism of aGLIFF the film festival was great. What we are getting [questions or criticism about the name change] is fractional. If you’re not a South by South West or an AFF, it’s a struggle to be a film festival. But when you’re having conversations with your sponsors, and they’re saying, ‘There’s really no need for a gay festival, why would I give you $25,000?' That’s not a good conversation to be having. How do you convince people that we’re relevant?” The name change became inevitable, but it was highly debated until a friend of current Executive Director Lindsay Muse slipped her a note. On it was written “Polari.” “There’s your name” he said.

In presenting the idea to the aGLIFF board, Sawin buckled down for argument. She was surprised to find that the name had wings. Members of the board that were previously opposed to name change gave their quick assent. Still, there was the prickly issue of the Polari language itself. Sawin insists that the name was fully vetted to ensure that it felt inclusive. Although Polari has been debated for decades by many as being misogynistic in origin, no female members of the board voiced any objections. Sawin offers context. “Here’s this concept and this word that has traveled all this time and had importance to a generation of people. What’s unique about the name is that [now] we don’t have to hide, we don’t have to hide our language or who we are.”

Still, the name perversely functions much as it did before gay liberation. It is a word that signals meaning to a few select people but remains meaningless outside. In some ways, it hides the “gay and lesbian” from the film festival – even with the aGLIFF subheading tacked on. It has, however, succeeded in generating buzz. As one of the nation’s oldest continually running LGBT film festivals, aGLIFF/Polari is a jewel in Austin’s cultural crown. If the name change allows for a reevaluation of the film festival, it has done its branding duty. But context is everything, and Polari will have to work hard to imbue its name with meaning. If relevancy is key, they will have to own it. 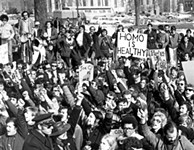 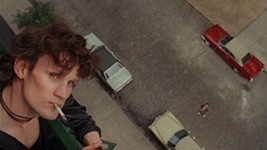