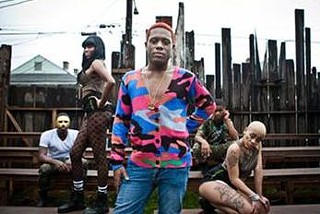 Nicky da B knows that camouflage should never be used to hide (by nickydab.com)

Mark Foley offers advice, Madonna snarks on Gaga, and Nick Gruber may be paranoid. Come to the AggreGAYtor’s window. I’ll be home soon.

• Although I never trust the “facts” from the flat-earthers at Fox, they certainly know how to be sensational.

• The Scottish male nurse who pretended to be lesbian to prey on forty nine young women has his jail sentence reduced. Really Scotland?

• In other Gags news, the mother monster takes up rapping. Fab Five Freddie must have told her everybody's fly. DJ's spinning; she said my, my.

• Oh, and it looks like Madonna may be burying the hatchet with Gaga, albeit in a passive aggressive way. I would just die if Madge sent her hydrangeas.

• The University of Louisiana denies charter to gay fraternity. Although the reasons behind the move are unknown, the frat is not accusing school of homophobia.

• The Red Pen, a Kentucky underground newspaper started as a response to their high-school’s censorship of pro-LGBTQIA stories, has won the Courage in Student Journalism Award.

• Intel, Wells Fargo, Bank of America, and Verizon are among the major donors of the anti-gay Boy Scouts, often in direct violation of corporate anti-discrimination policies.

• Olivia Thirlby, star of the surprisingly well-received remake Dredd 3D, comes out as bisexual. The AggreGAYtor is less concerned by her sexuality as he is concerned that Dredd 3D was well received.

• On the first year anniversary of the lifting of Don’t Ask Don’t Tell, the military still treats transgender Americans as second class.

• Meanwhile, gay and lesbian service members are still waiting for benefits for their families.

• Nick Gruber alleges that Calvin Klein has hired a private eye to keep tabs on his former trophy. Apparently, something does come between him and his Calvin.

• Radio bully Shawn Akers calls gay activism a "religion." Although the AggreGAYtor has occasionally been known to kneel, it is hardly in the service of supplication.

• Ruth Bader Ginsburg hints that SCOTUS will take on DOMA within a year. Also, I kind of like to picture Ginsburg roaming the streets of Santa Fe wearing a three yards of turquoise. I think she and Iris Apfel should be besties.

• Well, well, who’s that on the cover of French Vogue? Seriously, who is that? George Michael has been airbrushed to look like Eric Idle.

• Mittens Romney is really having a bad news cycle, having been served the latest indignity of receiving campaign advice from Mark “Pageluvah” Foley.

• The AggreGAYtor is aflutter over the latest selection for the Free and Queer movie night at the ND; searches furiously for his rubber bracelet stockpile.

• COUNTDOWN TO PRIDE: Today’s Pride tip comes from 2012 performer and bounce legend Nicky da B, who reminds you that it’s better to stand out than to blend in.