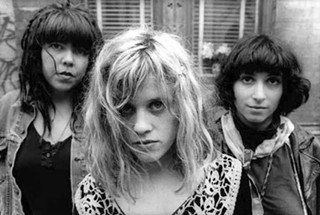 Lori Barbero can bruise my violet anytime (by tomtommag.com)

Rupert Everett flaps his gums, Jane Lynch takes Atlanta Pride to task, and Rick Santorum goes heavy on the foam. Today’s AggreGAYtor’s got all my sisters with me.

• Hillary Clinton is being accused of intentionally sending gay ambassador to Libya.

• US census techniques for documenting LGBTQ community still have a lot to be desired. Apparently, they don't believe that "we're here" part.

• While the repeal of DADT has arguably increased the volume of available homosex, that still doesn’t mean you can film it.

• Oklahoman judge cites Bible in denying transwomen legal name changes. I would also be willing to bet he is concerned by sharia law. A little too ironic, yeah I really do think.

• Chicago prosecutor is recovering after trying to prevent gay bashing. The AggreGAYtor is no longer holding out for a hero.

• Signs supporting marriage equality are being stolen and vandalized in Minnesota.

• Meanwhile, in DC, Metro Weekly stands are literally being shat upon.

• Although it is all about the economy, Republican senators busy themselves trying to prohibit same-sex nuptials on military bases. Maybe they ought to take up knitting if they have that much free-time on their hands. I hear Ann Romney just loves shrugs.

• Although I generally try not to harangue beleaguered alt-weeklies, St Louis’ River Front Times should really be ashamed of the accompanying photo to a piece about opposition to LGBTQ discrimination law. Bad form guys, bad form.

• Yale welcomes back ROTC in the wake of DADT repeal.

• Cameroon jails citizen for texting “I love you” to another man.

• The Sydney Underground Film Festival, who banned a film about gay sex two years ago, apparently has no problem with donkey banging. Heeheeheeheeheehaw.

• The AggreGAYtor thought that there would never be a day where he agrees with his frothiness Rick Santorum; but, gosh darnit, pigs do fly.

• Actor Rupert Everett can’t “think of anything worse than being brought up by two gay dads.” The AggreGAYtor certainly can. Just you try to watch his performance in Prêt-à-Porter without a dilauded.

• COUNTDOWN TO PRIDE: I know she’s now a local, but The AggreGAYtor is giddier than champagne that Lori Barbero of grunge legends Babes in Toyland will be at Pride this year. I knew that I saved my Doc Martins for something.