Kate X got to chat Ms. Steinem up-close and personal. 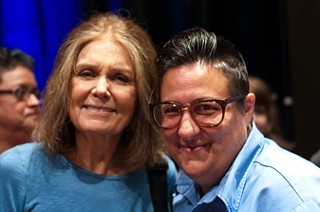 I felt like a total charlatan with that Professional Reporter's Notebook in my hand. But I dabbed my pen with purpose along with all the other news jockeys in the press conference (everyone knows that pure reporting's not my real gig). So when I raised my hand to ask Gloria Steinem a question, things went a li'l woolly.

While awaiting the start of the press conference, a friend and I had just been chatting about how violence against transgender folks fit within the context of the issues covered at this Texas Council on Family Violence conference that had brought Steinem to speak. It felt as valid as any other question asked. My hand shot up after the first reply was being wrapped. I introduced myself as working for The Austin Chronicle and offered the context of my beat to preface my question about violence against LGBT members of society and told her I had a column called "The Gay Place."

Without missing a beat, she shot back, "Oh, is that from the novel?" I was stunned at her attention and then nodded furiously while simultaneously patting my nose and jumping up and down. "Yes! Why, yes!" I enthused. "Thank you for knowing that!"

She proceeded to inform the crowd that Billy Lee Brammer's book by the same name about a fictional Texas governor and his political hay in mid-last-century, loosely based on the political career of LBJ – was one of the last times the word "gay" was used to not mean "homosexual." I was beside myself and grinned at her like an idiot. I'm not even sure what I was writing as I scribbled into my stupid little book.

After the official questions, she stepped over to me to continue the conversation about Brammer. She laughed as I told her that his daughters took issue with my use of their father's famous book, thinking my appropriation cheeky. I spoke of the subsequent conversations I had with one of them to humbly confess that it was truly an homage and not intended as a jab at all. I told Steinem that LBJ and I share a birthday. Her eyes burned into mine like the charmer and the charmed.

Earlier, as she was privately preparing her notes off to the side of the door for the impending press conference (which was really more a photo opp for the array of fellow feminist activists and a quick preview of her upcoming public address), a pair of slight UT doctoral candidates blustered in, thinking they were late, apologizing to all in the room. Without the benefits of filters or social cues, the two trotted directly over to Steinem to tell them of their mission to get quotes from her in the hopes that it might improve their chance of getting their research about representations of women in the media published. A few of us stifled giggles at the young women's huevos. I was absolutely taken aback when, again, without missing a beat, Steinem jumped right into the fray, "Have you checked out www.womensmediacenter.com? I'm involved in that, you know!" and enthusiastically began a back and forth with the women like a fellow dorm mate.

OK, at that point, I was sold and would not have batted an eyelid had they all three burst into choruses of Kumbayah or whipped out the cervix mirrors for a rousing circle of sharing. Gloria Steinem was that comfortable and disarming. Goddess bless her.

I felt twinges of guilt mix with the rising heat from the back of my collar as I noticed how hot this feminist pillar is in the sinewy, lean, mean flesh. I wanted to ask her out for Kombucha and whisk her away to Cheer Up Charlie's in my minivan rental. And today, I've been feeling like a total asshole every time I type, "SHE'S A TOTAL BABE" in email replies to friends asking me how it all went down. I especially feel like a tool every time I tell somebody – including all the editors at today's noon meeting – how that woman is all bedroom eyes and shy smiles. But it's true. Gloria Steinem's a flirt. And I wasn't the only one who noticed, but she sure made us all feel like we were. 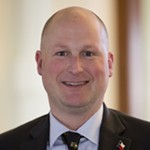 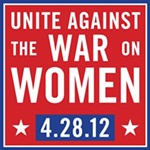