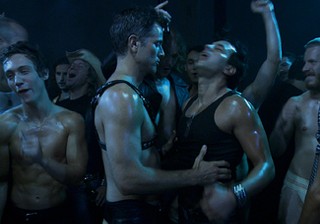 • Tampa bathhouse is hoping to bring GOP delegates to the poles with free admission.

• In one of the most confusing missives from the culture wars, UK’s Society for the Protection of Unborn Children warns that gay marriage leads to abortions.

• New Nielson report reveals that a third of American TV watching is spent on LGBT inclusive shows. No word on whether Ryan Murphy’s checkbox tokenism counts as “inclusive.”

• NOM’s Brian Brown and Dan Savage debate gay marriage in the most awkward dinner party since The Discreet Charm of the Bourgeoisie. While I appreciate the sentiment, nothing quite makes me bristle like the suggestion that our lives are up for debate.

• The AggreGAYtor is still hoping that GOProud is staging an elaborate performance art piece in endorsing Tammy Baldwin’s anti-gay opponent.

• Avril Lavigne has dated a seven layer dip of middling male recording artists and reality also-rans, but it took the love of Chad Kroeger to quell the lesbian rumors. Although the AggreGAYtor must remind some media outlets that sexuality is not binary, he would like to think that no LGBTQ person would associate themselves with Nickleback.

• Transgender talk show set to debut in Korea. Let’s hope they do a better job than their American counterpoints.

• Oh Kathy Griffin. You don't have to work so hard for the LGBTQ community to like you.

• Here’s a new one: The Alliance for Freedom likens LGBTQ activism with racism.

• Moderate Democrat group Third Way offers primer for candidates on how to frame marriage equality positions. God forbid any politician saying that it is just the right thing to do.

• Zimbabwe LGBTQ activists are still being harassed after recent raid.

• Arizona congressional race heats up amid charges of homophobic campaigning.

• The AggreGAYtor wishes to express his admiration for everyone in this great state working for progressive causes. It takes a ton of perseverance to keep up the fight in a state that keeps electing officials like Judge Tom Head.