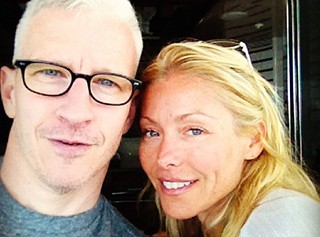 Anderson Cooper does some housekeeping, Rick Santorum tried to save the day, and Joe Gibbs makes a Freudian slip. Today’s AggreGAYtor is sexy and cute, and popular to boot.

• Right-wing “report” claims that the Chick-fil-A fracas was “manufactured” the LGBTQ lobby.

• Busybody “unidentified sources” insist that Anderson Cooper has given Ben Maisani the boot. The heartache can only be mended by Kelly Ripa and mimosas.

• If the AggreGAYtor was still 14, he would be snickering over legendary coach Joe Gibbs’ recent statement that he “was queer for tight ends.”

• Andrew Shirvell, the Alex Forrest of Michigan, is ordered to pay $4.5 million to gay U-M student.

• Festivo: A Queer Latin@ Art Show is looking for a few more central Texas artists to round out the event.

BONUS RANT: The most basic lessons of humanity are built into our origin stories. The third chapter of Genesis brings in the serpent, slithering and duplicitous, ready to sculpt ignorance into belief. We were told evil is sneaky. Evil can change the course of history with a single hiss.

For LGBTQ Americans, 2010 was a watershed year. The cultural conversation bustled with reports of LGBTQ suicides. Don’t Ask, Don’t Tell, one of the last towers of institutionalized homophobia, started to crumble in a Senate vote. Everyone was chattering about Glee. Things looked hopeful for LGBTQ communities. Change was possible, change was now.

But the serpent was watching closely. The radicalized Christian Right saw the sympathy gained with every “It Gets Better” video. There is no way to say it without cynicism; bullying sold as a product and every product is exploitable. The Christian right, already resigned to a rapidly shifting culture, threw themselves to the lions.

Almost immediately, claims of persecution began to bubble from the septic right. Anti-diversity pundit Mike Adams posted an absurd op-ed that made the outrageous claim that Christians were being bullied nationwide. Tony Perkins of the Family Research Council slipped in the suggestion of Christian persecution in a 2010 Washington Post piece. The forked tongues worked overtime in co-opting oppression.

In 2010, those suggestions seemed ludicrous. There had been no evidence of Christian marginalization, even as the cries crescendoed in this year’s Chick-fil-A flap. But the game has changed. With one bullet, Floyd Corkins gave the radical right what they needed – a martyr and a hero. His attack on the Family Research Council’s headquarters lent egregious lies the glossy sheen of truth.

Rationally, America should see that the incident was isolated and paled in comparison to the many hate crimes committed against LGBTQ persons each year. But America is rarely rational. It is telling that every major LGBTQ equality group immediately sent out a shared letter condemning the attack. They were girding themselves for an unfair backlash caused by rhetoric made flesh.

Indeed, the radical right wasted no time exploiting the incident. The FRC blamed the Southern Poverty Law Center for labeling it a hate group. The National Organization for Marriage blamed wonks critical of anti-marriage equality groups. The Texas GOP saw an opportunity to energize the base. Even Karl Rove couldn’t have created a more perfect shit storm.

While the attack indeed should be condemned; LGBTQ activists cannot let the radical right take on the mantle of victim-hood. The Family Research Council is not a victim; it is a well-funded think-tank spreading LGBTQ hate. It is a think-tank that breeds violence by comparing queerfolk to pedophiles. It is a think tank that lobbied Congress to not condemn Uganda's brutal "kill-the-gays" law. It is the serpent, ready to say anything to make evil manifests. We don't need to use bullets, but we still need to keep them in our sights.