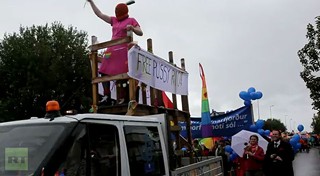 Jón Gnarr, the mayor of awesome. (by rt.com)

• As someone whose first crush was on the X-Men's Nightcrawler, the AggreGAYtor is thrilled about the announcement of a queer comix grant.

• Distressing damsel Bristol Palin has the vapors over media coverage of her homophobia.

• Bristol may want to read this story to see what real discrimination looks like.

• Lesbians have traveled to space, racked up Olympic gold medals, and pioneered civil rights; but some gossip muckrakers still think it’s OK to use “lesbian” as a pejorative.

• This video of Russian activists being defiantly queer in the face of oppression warms the AggreGAYtor's heart.

• Long before Cosmopolitan Magazine became the sweaty, steamy repository of all ways to please a man, it revolutionized the way a generation of women thought about sex. It was also where the AggreGAYtor first caught a glimpse of a particular private part. Hat's off to Helen Gurley Brown, the women who helped me realize I was queer.

• AGLIFF and AIDS Services of Austin announce the line-up for the Big Love 25th year anniversary mini-film fest - including the Austin premier of Vito and AggreGAYtor fave Paris is Burning.