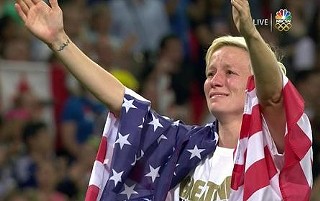 Pinoe reaches to give the AggreGAYtor a hug (by sbnation.com)

The Olympics get steamy, Rob Halford champs at the bit, and the Big Wheel keeps on turning. Today’s AggreGAYtor really, really, really wants to zigazig ahh.

• It's official: marriage equality language is in Democratic Party platform.

• The Log Cabin Republicans get a seat at the table for the GOP platform process. The Koch-suckers of GOProud claim they sat there first.

• Meanwhile, a lesbian servicewoman is not granted the same respect.

• Best notify their next of kin; Facebook explodes as Seattle's Great Wheel operator is accused of homophobia.

• The AggreGAYtor is not ashamed to say he went verklempt while watching Pinoe (that's Megan Rapinoe for the uninitiated) win the gold in women's soccer.

• Water is the essence of wetness: Jezebel has a stroke-by-stroke round-up of the Olympic swimming gay fan-fic.

• We got Em in the place who likes it in your face. The Spice Girls reunite to bid farewell to the Queerlympics.

• Missisippi museum decides to stop living in the past and repeals anti-gay marriage policy.

• I'm not calling anyone copy cats, but Austin had the Chick-for-gays concept first.

• Today is the last day to get your nominations in for Austin Pride’s Grand Marshall.