Austin's LGBTQ Has the Prez's Ear, and vice-versa 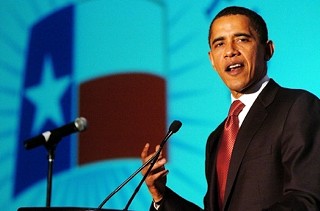 President Obama (from a 2008 Austin appearance) (photo by John Anderson)

If you were anywhere near downtown yesterday afternoon, it was pretty clear something was in the air: Air Force One! The 44th President held a fundraiser for his re-election campaign at Austin Music Hall on Tuesday night, and there was an LGBT connection.

Meghan Stabler is a name Austin LGBTQ folks should know. She was a Grand Marshall for Austin's 2009 Pride Parade for her work as a transgender activist and LGBT lobbyist. She now not only sits on HRC's national board, but she's part of the Obama 2012 LGBT Leadership Circle, one of the groups that brought the president to Texas to speak. "He kept his speech focused on the middle class… jobs, the economy, and he also reaffirmed his commitment to the LGBT community," said Stabler.

The buzzing energy inside the Music Hall flowed out onto the streets.

Police barricades and city buses were used to block off the streets surrounding the venue. Horse guards lined Third Street. Austinites, dressed in their Sunday best, waited in lines that curled around the block to hear President Obama speak.

“It was very surreal,” says Brian Carr, one of our classified ad reps here at The Chronicle and gay-about-town, obviously excited to see 44. “To see that motorcade go past: It was almost like he was in a traveling goldfish bowl, and we all became part of that. Knowing that the eyes of the world are on you for just that moment is a strange experience. The President takes the podium and you’re wondering, "Is this really happening?'"

With only the introduction of the overhead speaker, President Obama took the stage for 45 minutes. The President’s recent support of gay marriage and HRC Austin’s urging the LGBTQ community to attend had many wondering what the President’s speech would focus on.

“It verged more on a stump speech,” says Carr. “He definitely did touch on gay issues. He talked about the repeal of ‘Don’t Ask, Don’t Tell’ and talked about the right to get married. That really got the crowd fired up.”

The Austin Music Hall was at capacity, selling beer, and playing Bruce Springsteen.

“He pretty much had the crowd in palm of his hand,” says Carr. After reading a piece today in the Statesman online, it's clear Carr feels for the Prez.

According to the piece, President Obama hosted a fundraising event at the Four Seasons, where he expressed interest in seeing the bats from the condo in which they were stationed. His Secret Service said there were blinders on his windows, and wouldn't allow it, but the President said he still hoped to sneak a peak.

“The barricades come down and the motorcade drives off, and the fishbowl is gone, and he’s in it,” says Carr, wistfully. “And that must be kind of a hard… to always have a hundred people around you. You can’t just get up in the middle of the night and go to Sonic for a hamburger.”