Lots of low-down dirty down-lowers in this week's news round-up.

The weather has been positively Spring-like, my dearies, and the news has been, too! Not only did an anti-gay Republican get outed as a man-loving super creep, but some Atlanta gaybashers and an Indiana transphobe got their comeuppance. Plus, lots of great news if you love gay marriage! Let the dishing begin!

BEST GOP SEX SCANDAL EVER So last week, the Mitt Romney campaign's Arizona co-chair, Pinal County Sheriff Paul Babeu (pictured in steamy hookup photo), got outed as gay amid allegations that he had threatened to deport his undocumented male lover.

This week, the hits keep on coming as Babeu faces allegations of once dating a student while serving as headmaster of a physically and sexually abusive all-male private boarding school.

ACCUSED OF SUICIDE The spying trial of Tyler Clementi-roommate Dharun Ravi began last week. Unless you've been living under a rock, you probably know that Ravi is accused of spying via webcam on his gay roommate Tyler Clementi. Clementi later committed suicide.

Ravi wouldn't be on trial right now if Clementi hadn't killed himself. But Clementi did, and now Ravi has gone from forgettable university douche to an effigy to be burned on the national pyre of outrage over LGBT suicides. Quite sad, really.

HOTLANTA GAYBASHERS ON THE DOWNLOW? Last week, three cowardly teens jumped openly gay Brandon White and uploaded the beatdown on the Internet. Not only have all three scrubs been arrested (their video helped) but it could be that they beat White up because he had threatened to expose their downlow sexual antics.

MARRIAGE BY INCHES Several big happenings in gay marriage land: Supporters of Proposition 8 asked the full Ninth Circuit court to issue a full review on the court's rule of the law as unconstitutional. Meanwhile, U.S. District Court Judge Jeffrey White ruled the Defense of Marriage Act (DOMA) as unconstitutional, something the Republicans will fight in court (of course).

Around the same time, the Department of Justice announced that it won't defend any laws that discriminate against the spouses of gay service members by denying them military benefits. The tide slowly turns, my friends… 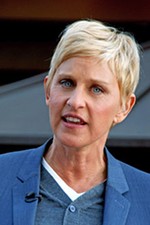