Yeah, we're sick of her too. 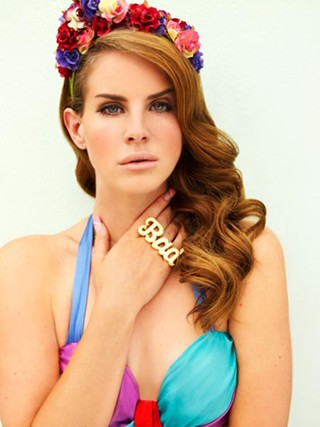 Imagine a world in which music is completely detached from any visual imagery. In this magical world, albums are sold in generic packaging, there are no music videos, and artists are never photographed. Music would solely be judged on what comes out of the speakers. Would David Bowie have the same impact? Madonna? Lana Del Rey?

The blogosphere's new punching bag "it girl," Lana Del Rey, is one of 2012's most talked about pop stars. It all started with 2011's "Video Games," a gorgeous, dreamy mix of orchestral noir and pre-feminist sentiments. The song finds Del Rey romanticizing playing the subservient role to her man, totally cool with being ignored while he plays video games, but the pain in her voice suggests she may just be bottling up something darker, much like some women would do in the era she mines for inspiration. The magic of this song, plus her stunning looks and sexy image rocketed her into notoriety and scrutiny. Her seemingly disingenuous makeover from the homely girl next door, Lizzy Grant, into what her handlers like to call "gangsta Nancy Sinatra", complete with a new pair of seemingly worked-on sex kitten lips, instantly brought on questions of authenticity, the indie rock holy grail. Of course, you won't read anything about appearance when you read about 2011's male breakout stars such as the cutie James Blake. Add to that her disappointing, premature Saturday Night Live appearance and you have the perfect storm of backlash.

So after all the hype how does her debut Born to Die hold up without all the pouting and sex eyes? Anyone looking to be blown away may be disappointed. Nothing quite hits the highs of "Video Games" or "Blue Jeans," but it is a decent debut nonetheless. The album picks up right where the first single "Born To Die" left off, full of canned strings, hip-hop tinged beats, and Del Rey's Americana Ke$ha schtick on full blast. The album is split between cheapo Mark Ronson knockoffs and Chris Issak-esque doomed love songs trying to recapture the magic of "Video Games." Unexpectedly, the up-tempo track are the ones that work. "Diet Mtn. Dew" comes off as a cheap version of a Amy Winehouse song but is infectious despite its cheesiness. "Off to the Races", another rinky dink Ronson-y beat, is her most overtly pop song, a catchy crack baby of Betty Boop and Gwen Stefani. After 12 tracks (15, if you count the bonus tracks) of recurring lyrics and sounds, the album starts to feel one-note.

You would be hard pressed to find a similar narrative in recent indie rock history, and maybe that's why she is being met with such hostility. Independent music fans are accustomed to the internet propping up the underdogs. Lord knows we have no shortage of desperate hobags with their pumped-up tits trying to make it big in pop Candyland. It's understandable that music fans have a mechanism of mistrust built-in for anyone who uses their image so much to make it in the business. But ultimately neither Rey's music nor her image benefits from taking her at face value. Liz Phair put it best "She's writing herself into existence. She's giving herself a part to play because, God knows, no one else will, and she wants to matter in this life. As a recording artist, I've been hated, I've been ridiculed, and conversely, hailed as the second coming. All that matters in the end is that I've been heard." We hear her, perhaps way too much nowadays, but loud and clear.

Check out her video for "Born to Die":