Mardi Gras Currency: I Am a Tosser

Beads for dignity. It's the American way.

Welcome to Mardi Gras season – next Tuesday, Feb. 21, 2012, is Fat Tuesday – so I'm gathering some old posts and updating them for all you last-minute revelers or Mardiday-dreamers. This post [originally from 2008 and since retooled] is about beads. 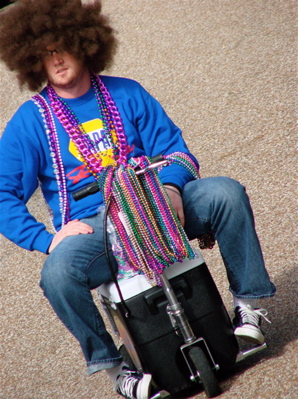 Thus guy definitely has technique… and steez for days. (photo by KXM)

There is technique to this bead thing. What makes for good bead technique is highly subjective.

As a parade goer (I have been a spectator at many a New Orleans parade and most recently, a bead beggar at Galveston's Krewe of Gambrinus Beads & Make Believe Parade), my technique for begging and catching is pretty simple: eye contact and focus. Sometimes a shout, a humiliating dance, or pageant wave doesn't hurt. Some people do the reach around, some bring nets on long poles, and some even jump in front of old ladies and children (when accused, cut your losses, hand them your prize and act like you were intending to catch it for them as a public service all along). 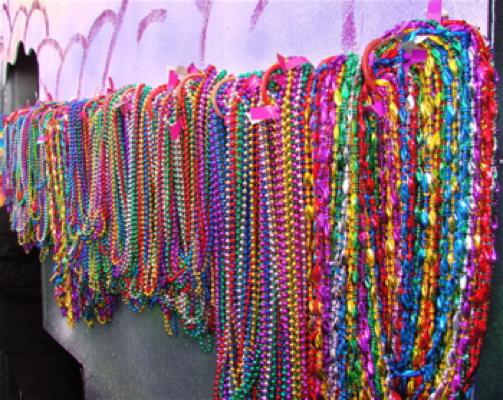 Strands near the Strand: Part of the grand scheme to salve the masses (photo by KXM)

It makes sense as a spectator to have a plan for collecting your winnings, but who knew there was so much technique involved in tossing? 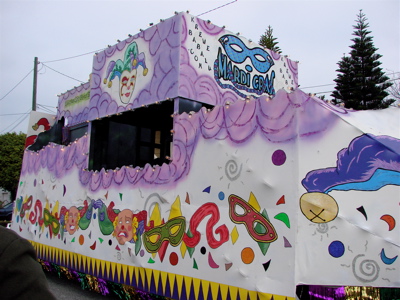 Our Babalu barge (photo by KXM)

The next morning, I was the guest of the Krewe of Babalu and got to ride on their float. Like most lower- to lower-middle class denizens, I just assumed that the landed gentry simply flung their largess with such abandon because otherwise they would drown in it. But, as with the management of wise investments and well-padded assets, that shit doesn't sort itself out. Bead tossers must plan in advance and pre-arrange their booty. To wit: Parade floats are equipped with large hooks on which to pre-load beads. Bead strands come in dozens and are wrapped together with little tags (that usually say "Made in China"). You have to load all your beads onto these handy hooks or you will waste valuable parade time unpacking bags and separating strands. Every float veteran wanted to be the first to yell at a newbie, "Whatever you do, do not take off the tag! Leave the strands connected until you are ready to throw them." You can also tell a lot about a person by how they toss. There are Frisbees, fast pitchers, spinners, overhanders, and many an underhanded. 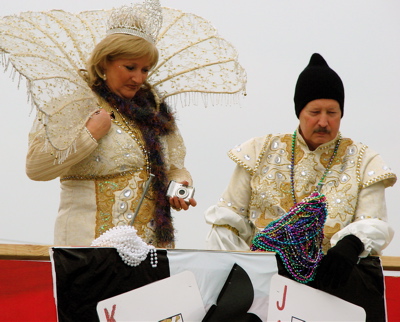 Much can be gleaned about human nature from these perches atop the float. I began to relate to the plight of the well-heeled, so misunderstood by the great unwashed masses for all they have amassed. Give a girl a bag full of beads she didn't pay for and supply-side starts to trickle down faster than last night's Jelloshots. Once I was put in charge of a float-station's-worth of bead distribution, it became so clear: You bitches are greedy and need someone else to decide for you who gets the beads. You poor souls, willing to cash in your last shred of dignity for some crappy trinkets. Come to daddy. 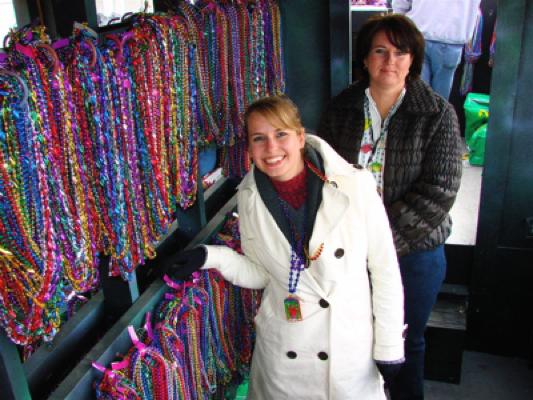 They look innocent, but RoShelle and Melody are preparing to flood the market (photo by KXM)

But, I am nothing if not benevolent. I would love to bestow upon you some bead catching hints:

• Don't stand near children. They are smaller than you, they are more pitiful than you, and ultimately, way cuter. It is a no-win situation. We tossers will always throw to the doe-eyed child.

• If you are a guy with a girlfriend, do not reach around her and grab beads out of the air clearly intended for her. It is not cute, you do not come off as athletic, you come off as lame. Plus, if the tosser is a feminist or a man-hating bulldyke like me, you will piss off that tosser who will then proceed to dig out the rarest, most-prized, exciting, blinky-lit throw and/or scoop up an armload dripping with beads and make sure that they land in her hands, just to spite you. 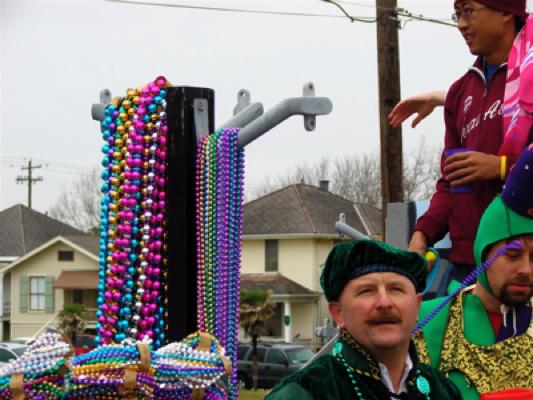 Overlords of your dignity (photo by KXM)

Also, here is some advice that might save your life:

• Don't stand near anyone in a wheelchair. They carry big sticks called canes or crutches and will beat the shit out of you for a bead and then call the ADA. They are vicious. 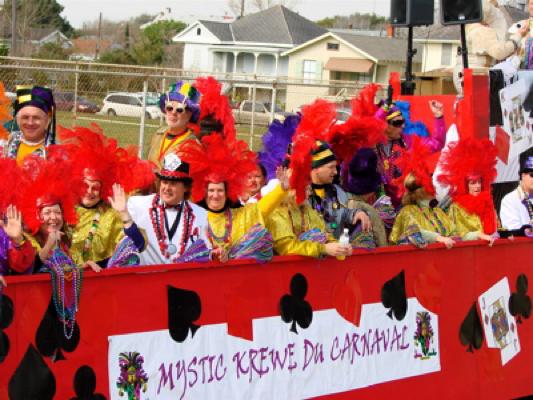 Nothing mystic about capitalism… (photo by KXM)

And then there's this: Near the slow start of the procession, as I am feeling the warmth of my own damn humanity, the transactions might feel somewhat personal. We will look each other in the eye. Items which have just touched my hands will touch yours. We might even feel the spark of a connection as you benefit from my generous spirit. However, as the parade rolls through and crowds of you begin to swarm, do not mistake my noblesse oblige for actual flirtation or affection.

You are the throng. I am the privileged. And this is America. 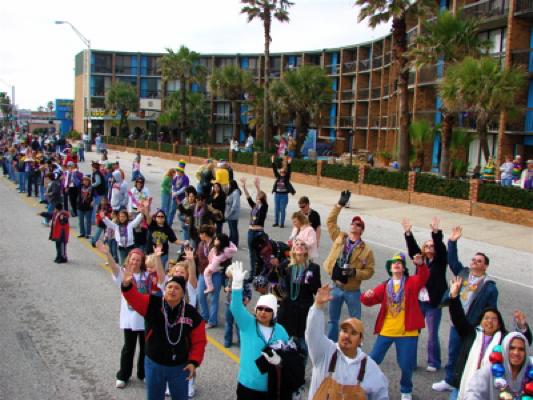 Tell us what you want, o great unwashed. (photo by KXM)


Be sure to check back here for more Mardi Gras posts throughout the season.