This week's LGBT news round-up has good news all around! 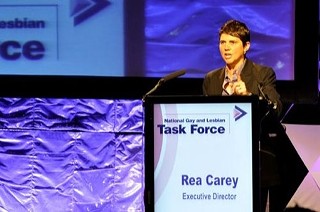 Thank your lucky stars, young unicorns, because not only did Austin make the list of lesbianiest cities, but there's good same-sex marriage news, a push for trans-rights in the military, and a queer-friendly guide to this week's hyper-masculine celebration of heteronormative violence… (or for those who just really wanna see Madonna's half-time show).

THE BIGGEST CHALLENGE FOR LGBTs THIS NOVEMBER: Because right-wing anti-LGBT groups can no longer win elections by simply demonizing queers, they've started making it harder for queer-friendly voters to actually cast votes — the National Gay and Lesbian Task Force's Rea Carey (pictured) explains it all as well as the other challenges facing LGBTs this year.

By the way, have you heard of the recent study linking low IQ and conservative beliefs to prejudice? The researchers says it doesn't mean that all conservatives are stupid, but that perhaps stupidity is linked to extremist views.

FRENCH CLASS: The makers of The Most Popular Girls in School have just released a new video complete with Glee, Gossip Girl, and second-rate handjobs.

In related news, a saliva-based HIV test has been found to be just as effective as a blood test.

Meanwhile, OutServe magazine for military LGBTs has dedicated its latest issue to "The New DADT: The Miltary's Ban on Transgender Service." Will allowing transgender people to serve be next on the military agenda?

And for the rest of us anti-war types who dislike the idea of queers joining a corporate-owned, brown-people-killing military monster, take a peek inside the newly released book, Against Equality: Don't Ask To Fight Their Wars. It's peace-tastic!

A CURE TO HOMOPHOBIA: Can be taken orally or anally with or without alcohol (above).

THE SUPERBOWL FOR BEG-GAY-NERS: If you're attending a Superbowl party this weekend, but wanna have something more to talk about than just Madonna's half-time show and the commercials, check out this short, informative guide that covers everything from the fashion of the team's uniforms, each quarterback's ability and sex appeal, as well as the LGBT-friendliness of the teams.

In other sports news, the National College Athletic Association became an official partner of the LGBT-sports organization Athlete Ally to help end homophobia in collegiate sports.

And did the U.S. Figure Skating Hall of Fame snub U.S. champion Rudy Galindo for being gay, HIV-positive, and/or Mexican-American? Que escandolo!

MARRIAGE AND STUFF: In New Hampshire, some douchey Republicans may soon vote to repeal the state's marriage equality law. Luckily, the governor said he'd veto any attempt to do so.

In Maryland, Governor Martin O'Malley introduced a marriage equality bill just a few days before his wife called anti-equality legislators a bunch of "cowards" — she later apologized… lame. But you can read a quick update about pushes for marriage equality in eight other states here.

Lastly, the dumb House Republicans are pushing a bill so that military chaplains won't have to officiate same-sex marriages… something they can already legally refuse to do.

BISEXUALITY - NOT A CHOICE, BUT WIDELY HATED: Last week, Sex in the City's Cynthia Nixon said that she chose to become a lesbian and every LGBT person in the world freaked out. Here's just about the only reasonable analysis about why she said and how it might actually help LGBTs challenge the idea that sexuality identity as a choice is somehow illegitimate.

CAN DEAD CELEBRITIES BE GAY?: 88-year-old former Marine Scotty Bowers just published a book called Full Service: My Adventures in Hollywood and the Secret Sex Lives of the Stars in which he claims to have run a gay and bisexual Hollywood prostitution ring that hooked up Katherine Hepburn with over 150 women.

In response, the ladies at The View discussed the ethics in outing dead celebs above.