Dan hits us with his news bits 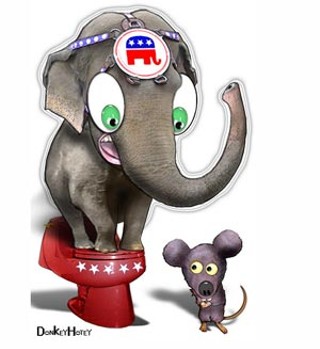 Did you know a gay man beat out Michelle Bachmann for president in the New Hampshire primary? Oooh gurl! Where you been??!

It also turns out that one of the most rabidly anti-gay candidates loves gays, as well as good gay rights news and a fabulous bitchfight brewing between Elton John and Madonna in this week's round-up of extra sparkly LGBT news!

Meanwhile Jesus' self-appointed anti-gay representatives on Earth have endorsed Rick Santorum (and in case you didn't know, Rick's wife assures us that he loves gays, despite his desire to criminalize homosexuality).

And finally, Mitt Romney has accepted an endorsement from Kris Kobach, the Kansas Secretary of State whose church has stirred up anti-gay violence in Africa.

COULD GAY MARRIAGE DRASTICALLY IMPROVE NEW JERSEY?: The Garden State's Republican Governor Chris Christie has refused to say whether or not he will veto proposed legislation to legalize marriage equality in his state. However, he has told his GOP state legislators to "vote their conscious," suggesting that he won't retaliate against any elephant who goes pink.

In other New Jersey news, the Star Ledger reports that Union High School teacher Viki Knox has been put on paid administrative leave and could get fired for "calling homosexuality a 'perverted spirit' and a 'sin' that 'breeds like cancer'" on a Facebook post against her school's LGBT History Month display.

WANT TO PEE? SHOW TENNESEE YOUR ID: Tennessee State Rep. Richard Floyd has introduced a bill non-gender conforming individuals to present a birth certificate just to enter bathrooms matching their "correct" gender. He did this to stop cats from marrying dogs and to prevent his granddaughters from getting raped – no, really. Thank goodness his bill already seems dead in the water and would likely violate fourth amendment protections against unreasonable search and seizure.

THAT ENTER-GAY-NMENT!: Have you heard? Elton John and his boyfriend are Twitter-angry that Madonna beat out John for the "Best Song" Golden Globe. Also, Dustin Lance Black's Proposition 8 play (creatively titled 8) will be performed in states without marriage equality during the 2012 pre-election season.

Audiences will soon get to see James Dean's rumored hook-ups with powerful gay men in the upcoming biopic Joshua Tree, 1951: A Portrait of James Dean and Zenne Dancer a powerful documentary about the "honor killing" of Ahmet Yildiz, an openly gay Turkish man killed by his own father.

Comedian Todd Glass recently came out as gay, the British gay romantic drama Weekend and the heartbreaking San Francisco AIDS documentary We Were Here both won Dorian Awards from the Gay and Lesbian Critics Association for best LGBT-themed film and best overall documentary.