Dandy tries to get in my panties using Hot Chip 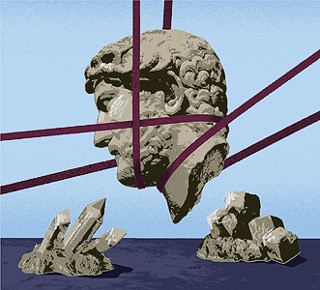 Most of us blank out on the road home after partying if we're not driving. I was starting to nod off when Dandy began blasting music out of his behind. "Thieves in the Night," track 1 on Hot Chip's latest album One Life Stand.

I blinked, and we were speeding through space. It was a gaudy rainbow mess of glitter, sequins, and gold. We could hear the stars talking smack as we flew by. We put their shine to shame. Rainbow Brite and Jem we're hookin' on Rainbow Road. As we kicked the stardust in their faces, I blinked again and we were microscopic, flying up the noses and out the mouths of various celebrities. As the song ended, I blinked again, and we were at the door of Dandy's lair.

Dandy insisted that I come inside, and I was too disoriented to say no. I immediately tossed myself onto his bed having no interest in Dandy's persistent advances. Dandy pranced toward his record player and continued where we left off on One Life Stand.

"Dandy, Hot Chip never helped anyone score," I said with a scoff.

Dancing with himself and tossing his bedazzled mane, he said "Made in The Dark had a lot of get-down jams. They got soul, bitch."

"Fair enough," I said, stuffing my face into a drool scented pillow. I blanked out until the insistent throb of track 3 stirred me. I feel better.

I looked up to see Dandy prancing before me. A living, breathing disco ball. He shape-shifted into my every fantasy, beckoning me to him. His stare cut through me like the ice in the air as he mouthed the words, "I only want to be your one life stand." Right then and there I melted into his arms and as I blacked out he took the form of Alexis Taylor winking at me. I awoke some indeterminate time late and we smoked cigs and played X Box.