News AggreGAYte for the Week of Nov. 8

Catch up on the queer news beat with Gay Place 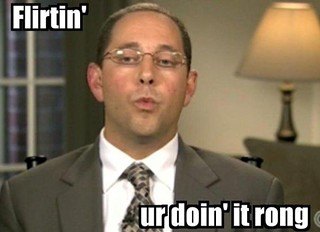 Ding dong, the douche is gone. In news from the Michigan Attorney General's Office, Andrew Shirvell, e-bully extraordinaire and now ex-assistant attorney general, has been fired.

It's about damn time! I knew this would happen eventually, but it's kind of amazing the amount of crap everyone – especially University of Michigan President of the Michigan Student Assembly Chris Armstrong – endured from this guy. I get the feeling that this creep got off on having his 15 minutes of fame. Thankfully, we have shows like The Daily Show which did a perfect job giving him the proper skewering he deserved.

Good riddance! May he fade from our collective memories!

In Don't Ask, Don't Tell developments, the 9th Circuit Court of Appeals, those crazy cats, have decided to allow DADT to continue as usual (sort of) during the whole appeal mess. Kate will be hitting up the blog with a more in-depth report later in the month.

Everyone have a great week! 'Til next time, this is Rob keeping a queer ear to the sky!