What's That on Your Blog? Fred Schneider, Part 2

One part of the B-52's/Superions front man was not enough. 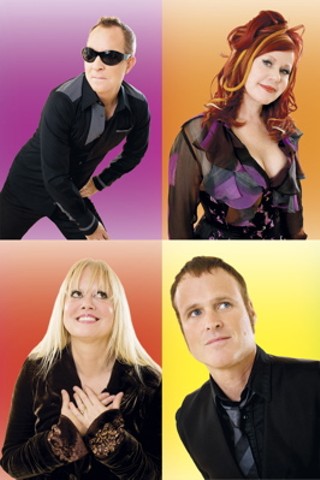 The 1894 Grand Opera House in Galveston still has tickets for this one Texas stop on the B-52's tour, next Thursday, November 11. Here's Fred Schneider in Part 2 of a sit-down where we talk about teh ghey, and his place in the pantheon of LGBT-I-Is and Q cultural icons.

AC: I want to throw out some names of Queer Icons through the ages to you and get your first reactions…

FS: Well, I'm not well-versed on Frederick the Great.

AC: Well, honey, get out your Funk & Wagnalls.

FS: (Laughter) Okay. Nobody uses an encyclopedia anymore, you just go Google everything.

AC: That ties into some questions for you in a little bit, so hold up. …first up: Lady Bunny.

FS: Love her. She's hysterical. She was in some B-52's video, and I've known her for a long time. She is filthy gorgeous.

FS: Um… I like when she's not so dramatic, the way she sings… there's one album that I really like but she's not exactly my cup of tea. I'm more for like Big Maybelle or Diana Washington or Billie Holliday.

AC: Had a feeling. Divine?

FS: I've had airplane rage, too, but I've gotten it under control. (Laughter.) Yeah, fire his ass.

FS: Oh, he did Flaming Creatures?

FS: You know what, I have a biography on him, but everytime I read something he said, I think, "He was like the first intellectual Paul Lynde!"

AC: (laughs.) Paul Lynde was on the list but I think that takes care of that. Klaus Nomi?

FS: Oh! I love Klaus, I love his music. Actually, he used to open for the B's way back, and I've been a fan ever since.

FS: I want to read that book, there's a woman Charlotte Chandler who writes biographies – they basically talk and she records. But she does it in a way that makes for a brilliant biography, and she did one with Bette Davis, I'd like to read it. She was a great actress.

AC: They made her wear a dickie?

FS: No, it was a napkin, literally. A napkin tied around her neck. Have you seen her macarena? That's entertainment.

FS: Oh, what a great guy. He was a great fan and a great friend. He was, you know, well… He and Ricky [Wilson], they just died too soon.

AC: The sci-fi writer with all the lesbian stuff…

FS: I've seen some of his movies. Fascinating. I worked with Doris Wishman on her last movie; it was just surreal. I read the script and actually thought the script was really good. And then I realized I'm a terrible actor.

FS: Actually her first album was the first one I bought along with Meet the Supremes. I was a fan from day one.

AC: Vivian Vance, yay. Let's go on the butch side…

FS: Well, I thought they were both brilliant comedians. I always think women in comedy don't get their due. Like on Saturday Night Live the women were the funny ones but they're the ones who always left after the first or second season, and you're stuck with… you know, "Hamburger, hamburger, cheeseburger," or something, (Laughter) which I didn't think was funny at all. There's Catherine O'Hara, Genius! from SCTV, and um…

FS: Andrea Martin, I love her.

AC: It's so much funnier when you say "Hamburger, hamburger, cheeseburger." Quentin Crisp.

FS: I actually got to meet him once. I admire that he stuck to his beliefs and was fearless… for a little guy I mean, wow. It was much more difficult, I can't imagine what it was like then.

FS: Love her. I mean, John really had a troupe of actors. Fearless. And I like her music, too. I love her.

FS: Well, his best moment was with Cheech & Chong, so…

AC: Not with Jackass?

FS: I didn't see that, but again, he's still throwing the confetti so you gotta love him, you know.

AC: …it's worth the price of the whole film.

FS: I haven't seen any of the Jackass movies; I guess I should.

AC: If you can handle bodily functions… a lot of them.

FS: Well, I do Tweet a lot of things about indigestion, so…

FS: Oh, I love RuPaul. I've known him for a long time. I was in his Christmas special, which was pretty demented, about 15-something years ago. I wonder if that's on DVD? I've gotta get that. I played his manager who just told him he's washed up and awful.

FS: Well he's not camp, he's a comedian. (Laughs.) There's a difference between comedy and camp. Big difference. But nowadays people just assume anything funny is camp. A brilliant writer.

Did you miss Part 1 of this interview? Well, why the hell'd ya do that?