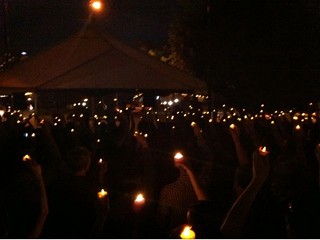 Speakers at the Spirit Day Rally outside City Hall spoke to our endurance and resolve. They invoked just fury and codified the emotions many of us have been feeling in the past weeks following the suicides of six queer youth.

October 20, 2010 marked the creation of a new day of remembrance. Celebrating the lives and mourning the deaths of those LGBTQI youth forced to endure socially engineered shame, it brought communities around the nation together.

Austin – always a progressive leader – was no different. City leaders, including Mayor Leffingwell, penned a proclamation in support of our rally's purpose.

In Washington, the State Department must have known the effect Secretary Hillary Clinton's vocal support meant, as this video made its way around Twitter and Facebook feeds and blog pages (including the Gay Place, of course).

Kate X and I watched from the back row. Proud of the outpouring of support we were seeing. With a bit more warning and better communication, what was already a large audience could have capitalized on the obvious willingness of a war weary queer community and become a massive gathering.

Still, there was catharsis. The effect with the candles was touching. As we stood at the bottom of City Hall's open-air forum and held our candles above our heads, a little girl stood on the steps above and said, "From up here, it looks really cool."

Yet, earlier statements made by Dana Cloud irked me.

It should be noted that I have profound respect for Cloud, a leader in our community (and quite a few others) whose tireless activism inspires and motivates. She – and individuals like her – form the lungs for our community's voice. I'd be a disciple of hers if I had the attention span or the cojones.

However, I have found her in the past to be too strict, unyielding; and her criticism of the Obama administration – and Secretary Clinton in particular – reinforced this opinion.

I'm no stranger to "Obama fatigue," nor do I believe national Democrats are above reproach. From his (rescinded) decision to have Pastor Rick Warren offer his inauguration prayer to the Justice Department's blocking of DADT repeal, President Obama's fair-weather support of GLBTQI rights is documented.

There is valid criticism. Today, the Justice Department appealed the stay of Don't Ask Don't Tell to the Ninth Circuit Court of Appeals, effectively empowering the law to ruin more lives than it already has. That's awful, and it should be yelled about. Loudly.

But did Obama's Justice Department pursue this course of action because they believe in the intrinsic value of DADT? Of course not. Obama's stated on more than one occasion his belief that the law is discriminatory. So, a question arises: did the Justice Department pursue the stay of DADT because they believe in the strength of Congressional law or because of the political expediency of a hot-button topic in an election year?

I'm not going to answer that question; it deserves long form analysis and should not be casually thrown around in a blog post without careful consideration.

Or a speech in front of a few hundred people at a political rally.

This is one topic that shouldn't be broken down into a sound bite.

And yes, other speakers did make the point that, from the top of the United States' national government down to the local PTA, the undermining of LGBTQI civil rights are a socially ingrained problem. Actions and statements from national officials do reinforce a message of inequity on the local level.

Conversely, you know what helps on the local level? Vocal support from national figures. Like… Secretary of State Hillary Clinton. I can understand criticizing Obama's recent appearance of transgression (and I'm unwilling to call it anything but appearance just yet), but taking Clinton to task for joining in on a prominent gay figure's video campaign to speak out against gay bullying strikes me as pointless and unnecessary.

We're talking about the Secretary of State here, after all, whose providence is solely outside the borders of our country. Secretary Clinton decided to speak on a domestic issue where she thought she could have a positive impact. This is the same Secretary who opened domestic partnership benefits for her department, sparking a major divergence from previous administrations' policies.

This isn't a case of "biting the hand that feeds you." That would imply a submissive role on our part. No, Clinton is responding directly to our concerns like we wish powerful, public straight allies would and getting criticized for doing so?

And no, of course I'm not making the statement that Clinton (or especially the Clintons) hasn't fucked us over in the past. She did just come out in support of GLBTQI youth. And she just told all GLBTQI individuals that "it will get better." That's a message to keep trying, keep pushing, keep rallying. The Secretary of State stepped forward as a GLBTQIAlly during Ally Week. And that's a big deal.

My point being: if you're going to name specific national figures whose statements and actions hurt our community, why not target those who are clear dangers? The insidiousness of those that claim to be our friends and strike us in the back is a danger; but you're not making the case that you've identified these individuals properly. Yet.

I'd certainly invite response. From Cloud or others. To help put things into perspective. Hopefully, if we have enough voices in the conversation, we can all take a step back and look at the individual lights coming together to paint a more beautiful picture.

Like that little girl said, "From up here, it looks really cool." I like to think that Tyler Clementi, Asher Brown, Raymond Chase, Sladjana Vidovic, Phoebe Prince, Meredith Rezak, Jennifer Eyring, and many others are looking down on the lights of support and remembrance and thinking the reaction "looks really cool." It did to me. 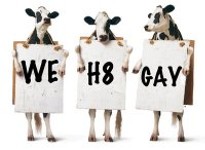