Brave and talented, Mando is the highlight of Project Runway

Apparently Mando has been HIV-positive for years and keeping it a total secret from everyone. That all ended when the designers were asked to create a textile inspired by their own personal experiences. Mando created a popping, if overtly literal print out of gold and black plus signs, the universal sign for "positive."

No episode of Project Runway comes without a twist, and in this week's, the designers were paid surprise visits by their families. It was very cute seeing Mando with his mom, and you could clearly see him struggling to come clean.

After initially freezing up on the runway Mando finally let it out and it was a total tear-fest. Once the crying subsided, Mando was crowned the winner once again – for the third time in a row. His design was the clear standout. His style is the most distinctive and fresh, and he totally deserved the win.

It's hard to tell what would motivate a person to use television to tell the world they are HIV-positive. Of course, my eyes we're rolling as they teared up. One must wonder how much this is Guerra's doing and how much was due to coaxing from producers. But when it comes down to it, he did a very brave thing, and in these tumultuous times, HIV has taken a backseat to other issues.

It is very important that those with HIV/AIDS have positive role models, people in the public eye who are not afraid to speak up and be themselves. Let's hope someone out there finds inspiration in Mando's strength.

For his bravery, his awesome sense of design and personal fashion, and for being so damn cute, Mando Guerra is our Gay Place Crush of the Week.

Oh, Andy!
Welcome, Mr. Cooper. We're happy to have you. 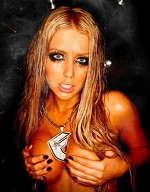 Can We Throw One Back?
Or how I wish coming out was like fishing.