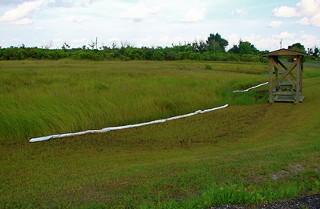 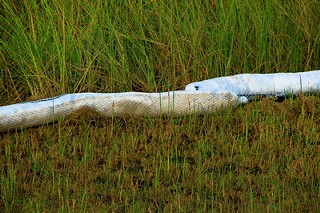 Looking west, from the atop the pier at Grand Isle State Park. The two blue circles in the dark square of tarp are wading pools used for cleaning. (photo by KXM)

An opportunity arose to go to New Orleans. But I couldn't shake a nagging feeling: It would seem irresponsible to be so close to the Gulf and to not at least try to learn firsthand about what's happening during this insane oil spill tragedy: Part two.

[Continued from part one.]

I'm feeling a little silly about my air-quality checks. They haven't revealed much. There is no cloud of gas odor – just fish.

Golden Meadow, one of the larger towns I pass, has that kind of fishy smell. About 20 miles past the town, I get a message from one of my contacts: I missed Kevin Costner's press conference held earlier that day about the spill-sucking centrifuge machines that he is selling to BP to separate the oil from the water. And hopefully turn the water into wine.

I'm about ready to pre-pay my toll to drive on a seemingly endless lattice of bridges that will eventually lead me to Grand Isle. I'm in a small crossroads, Leeville, LA, and have to go into Tyd's bait & tackle shop/deli/convenience store and swipe my credit card.

The toll system seems laughably byzantine, especially considering the primitive horror we all now face. It's all so technological. They even have cameras to catch you, find you, and fine you if you slip through. Our priorities are on fire! Oh, technology, how efficient you make us. We are so awesome.

The bridge network itself is majestic… not in the way that the water/land mass it spans is majestic, but in that sort of technology-conquers-all hubris so unique to our species. Again, with the technology.

Ultimately, however, one only need conjure being out in the middle of one of these concrete ribbons in a good ol' Category 3 to feel humbled at the nature we purport to top.

I turn left on Highway 1, and cross over to the island. An odd sight juts out from one of the waterways: A submerged truck. Remnant of Katrina? No telling. Whether or not, it's certainly a reminder of the recent catastrophe that most definitely resonates – but may soon pale in comparison – with this one.

There are cops everywhere. Correction: There are a lot of official-looking vehicles that seem to be unmarked cop- or security cars. There's one next to each coastal access area, each bearing a makeshift sign: "Beach Closed." Not yet sure of how much corporate martial law is in effect, I keep my camera down around these vehicles.

Driving deeper in, definite signs of security details emerge. Pretty much everywhere. The guys in brown shirts, I assume, are National Guard. The dark blue shirts, Coast Guard. The royal blue shirts (usually on young white guys), the security detachments assigned to each clean up crew. The white shirts (usually on black people*), the clean up crews. (*Granted, my observation is purely anecdotal, at a ratio of about 12:1…)

Whoa. Bits here and there seem organized, but not as organized as I would have assumed for such a massive, combined effort of federal, state, and local agencies. Honestly, though, I am not surprised. Everything since the initial news of the explosion of the Deepwater Horizon seems to be running in slow motion. Except for the oil.

The island is triggering a strange claustrophobia within. It feels like a very lazy martial law. (It's the same feeling I had ages ago in the Mexican interior at my first glimpse of teenage boys in sloppy military uniforms with machine guns slung across their laps: Lots of power. Unclear authority.) The number of unmarkeds alone begins to creep me out.

I find the man that Beth referred me to, local seafood processor Dean Blanchard of Dean Blanchard Seafood, Inc. ("A shrimp does not pass through this island that does not pass through Dean Blanchard," according to one local and echoed by many more.) Blanchard agrees to speak with me on very short notice and I am very grateful. But it's late on a Friday and weeks since my friend, who characterized him as talkative and animated, interviewed him. His office is a gold and purple shrine to the LSU Tigers – an office reflective of what Beth told me: Dean's gregarious, friendly, and funny as hell. Today, however, Dean Blanchard seems shell-shocked. (See video clip below.) No surprise. This time of year, his business would usually be handling two million pounds of seafood per week. Since the spill, they are down to about 200,000 pounds… a week's take caught at great distances past their regular fishing zones out in the gulf. Life during oil-time. What he smells in this mess is way beyond fishy.

There is no stench of petrol nor putrification in the air. There are no oil-drenched pelicans landing on my windshield, no gas-soaked gulls to dodge. The island is draped in an eerie calm.

The beach is just over the dune, and I've put off looking at it long enough. No matter what I see, I know I will cry. I will probably not see the now common pictures of hamburger-sized tarballs and oil-clumped seaweed. A day of clean-up is just at a wrap.

Even so, even if her beach were, at this moment, covered in BP's splooge, the sea never gives up her secrets, even in the time of profound tragedy, and things never will appear as dire as they truly are. Her surface hides her pain. And ultimately, also her wrath. The pelicans have come home to roost.

A friendly looking yellow school bus is pulled up beside one of the island's numerous beachfront stilt-houses. It's an access across the dune, so I pull in. I'm not sure if I'm going to be stopped or questioned, so I do what I normally do in these circumstances and try to look like I'm supposed to be there.

My camera is on as I walk up the dune. Over the rise, there's one of those white party tents. Scanning the beach, it's clear this is but one of many makeshift, shaded HQs for the small teams of cleaning crews. "Hey, she's taking pictures," hollers one of the crew members to a supervisor. Asshole. Two strapping young lads I could've birthed in my sleep swagger toward me. I am all smiles, explaining that my battery just died anyway (true: dammit!) and that I just wanted to see how the beach was doing (also true, strangely, I am fresh out of lies). The fellas explain that they have to "recite the drill anyway."

"You are allowed take all the pictures you want, ma'am. You just cannot cross that line." That bright orange line of boom? "The line of sand." That 3-foot high sandy berm? The berm. Their orders are from BP. Oh, BP. I see. What happens if I do? I smile. "We can detain you and hold you until we decontaminate you." "Well," I grin. "That will certainly be much more pleasant for me than for you." The ice is broken and suddenly, these guys are talking a mile a minute.

All of their orders come from BP. And this is something I will hear from many other islanders and imported workers throughout the day: Who is the Port Authority Public Information officer? Go ask BP. Who speaks for the police? Go ask BP. What if I have a question for the Coast Guard? Go see BP. If you are media, especially, you must register with BP at the Community Center.

I resist the urge. I'm not really here as media anyway.

The beach we are seeing, the young men explain, has been cleaned by the crew that is wrapping up for the day. A few dozen workers and some earthmovers/earthsifters have an assigned plot to clean each day. White tents dot the path along the island's length of orange and black boom and sand berm.

"If you're looking for shots of oil and tar balls, you have to get here early." Each day until dinnertime, these dozens of teams of dozens of workers clean this zone between the berm and the shore. Each morning, a new deadly tide of oil and destruction awaits.

Confoundingly, the Grand Isle State Park is open. Caution tape is everywhere. The park seems to be serving as a station to process and feed the cleaning crews. It's unclear what access the general public actually has. I head to the tall structure over the fishing pier that extends out over the gulf. It takes a few attempts to find the access, but it's there.

A nice couple from the Northeast is vacationing in New Orleans and said the same thing I felt when planning this trip. "We couldn't be this close and not come see for ourselves." This paying of respect was not uncommon. I heard this a few times on this journey.

Suddenly, I hear a very familiar, yet very unexpected sound: The clearing of a blowhole. A dolphin's blowhole. There are porpoise all over this shallow area which kisses the shoreline, under the pier. I am no marine mammal expert and will reserve my thoughts on what I witnessed, but I found their proximity and their movements disquieting.

A scan of the horizon reveals oil platforms and large ships. A scan of the water below, the closest the general public can get to it, reveals sheen. The beach here received the same scrubbing as the beach I saw before, but here, I could actually see the tide roll in. Usually at this shallow of depth – I overhear park attendants telling the couple – you can see clear to the bottom. Now, dark, particulate matter, pea green surf, and sheen make for a queasy concoction. From all accounts, this East end of the island is tasting some of the most bitter of all the tidal roll in.

I'm sad to be leaving. I learn from my contacts that I have access to an airboat tour and a gulf fly-over, if I wish to take up the offers. I am broke and circumstances for this particular trip will not allow it. I have to get back to New Orleans. I am totally heartbroken.

On the way off the island, I take a picture of the sun setting. It feels like the thing to do.

Grand Isle, La., for years buoyed by the commercial fishing and oil industries, finds itself between a fish and a slick place. How do the members of small coastal communities like this one feel now that their lives are stuck in the muck and teetering on such a harrowing brink? Outrage, toward both the U.S. government and at BP, the corporation responsible for this mess that has gripped this region and unsettled the nation.

The pelicans would come home to roost. If they could. 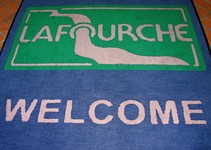 BPness: A Line in the Sand
Notes from Kate's trip thru Lafourche Parish to Grand Isle, LA., Part 1.