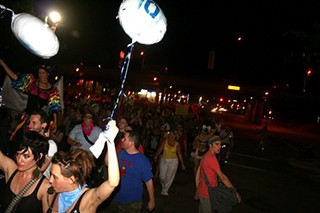 My favorite sign at last Friday's "QueerBomb," the alternative pride march, was: "STONEWALL WAS A RIOT, NOT A TRADE SHOW."

Queerty gets many of the facts right, but they are wrong to say that QueerBomb made people choose between the two pride marches. In fact, the QueerBomb folks (a handful of organizers and instigators, but no leaders, no hierarchy) were careful not to schedule the rally and parade directly opposite the corporate Pride events. Austinites, were they so inclined, could party with the freaks on Friday night and then put on a tie and march down Congress Street on Saturday. Queer on Friday, respectably Gay on Saturday. Frankly, I wish they had made people choose, but I appreciate their impulse to be truly inclusive.

I hope and pray that this Austin schism is just the beginning, that what we did here in Texas last Friday will inspire folks everywhere to take back Pride. Looking around me at the crowd as we marched together Friday night, I realized that it was the first time I had participated in a gay pride event when I wasn't thinking "These are my people??" I was thinking, "These are my people!!" I have seldom felt more proud to be gay or more thrilled to live in Texas.

(Cross-posted in a modified form at The Bilerico Project.)