Crashing an AGLCC meeting isn't nearly as awesome as it sounds 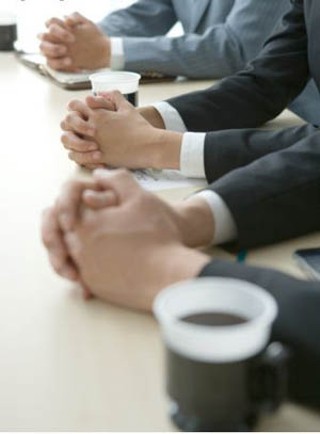 So, last week I found myself in an awkward position. No! not that kind of awkward position (sadly). This Lil' Roo was lost in the middle of one of the most surreal experiences a queermo in Austin can ever have: Sitting in on a networking luncheon for the Austin Gay and Lesbian Chamber of Commerce.

First, let me just say that this networking shit is WEIRD. On the surface, it all seems so fakey-smile, pseudo nice. Especially when it's literally just sitting and eating lunch with people who the only thing you theoretically have in common is business and who you're fucking. I didn't know what I was getting myself into, so when I was asked to pay a $15 meeting fee, I was totally taken aback.

"Even if I'm just here for the meeting, and don't plan on eating lunch?"

Yes! Even if! Fifteen smackers to sit and listen to AGLCC prophesize about Pride! Burn.

The keeper of the monies curtly said to find Chad Peevy, the President of AGLCC's Board of Directors and President of the Pride Foundation's Board (hmm!) to splay myself at his feet and beg to sit in on the meeting. Turns out, Peevy was fine with me being there and sitting in, and was nice enough to waive the meeting fee. I was even offered lunch! Um, yes please. Free is most definitely how my broke self rolls.

Despite the fact that I did get to fill my tummy, everything wasn't all rainbow flags and Pride socks. Lovely readers, this is where I get very sincere. This first interaction, this small, strange request for a "meeting fee" sums up the direction in which Austin Pride has moved, is moving and will continue to move if we, the Ls, the Gs, the Bs, the Ts, the Qs, the Is and everyone in between, don't start holding them accountable. Pride will continue to build itself as a fund aggregator (see Andy Campbell's The Cost of Pride more on the numbers), leaving behind the true meaning of the celebration.

Being in this room with the AGLCC Board members was a jarring wake up call. Not only was I the most woefully underdressed (you have no idea how much this bothers me!), but I was also the youngest person at this meeting, and undeniably the most gender non-conforming. Let's be real: I was the most QUEER. In fact (I guess I am so threateningly queer), that when the topic of QueerBomb was broached, Peevy turned right to me when asking the room if QueerBomb was present.

I wanted to say, "Yes, I'm queer. Yes, my lovely girlfriend thinks I'm the bomb. But kitten, this does not mean that I'm The QueerBomb." But I wasn't as bold as that. I was actually a little afraid of what the Board might do if I were to speak up. A culture of paranoia bred by fear isn't what immediately comes to mind when I think of Pride – at least not before this meeting.

I know what you're thinking. You're reading this, saying to yourself, "Ricky Roo, you're a gender-fucking socialist-leaning muckity-muck. You just have a bone to pick with the mainstream gays." While pieces of that may be true, that doesn't make my bone-picking tendencies any less warranted. I hold a deeply rooted respect for Pride celebrations and the legacy that they represent, and can't help but get a little soap-boxy when I watch our shared history become hidden behind banners for Bud Light and Best Buy. It is only natural that I support QueerBomb and its message of not only anti-capitalism, but also, most importantly, inclusiveness.

De Humphries, member of the AGLCC Board of Directors and who also sits on the Board at the Austin Gay and Lesbian Pride Foundation (because that's not at all shady!) confirmed my suspicions about the general tensions and exclusivity of Austin Pride during the ensuing one-sided conversation about the potential threat that QueerBomb and affiliated events might pose to the "official" festivities.

Humphries stated that QueerBomb looks like nothing but empty promises. Yet she seemed defensive, and went on the offensive, adding that if "bisexuals and transvestites" want to be represented, they need to "do it themselves" and stop "pissing on our parade."

This is the former VICE PRESIDENT of the AGLCC, someone who still sits on the Board. This is a woman who is, for all intents and purposes, the public face of LGBTQI (at least business and marketing in) Austin. She made it clear within this ostensibly public forum that she doesn't even want to respectfully recognize with words, let alone actions, the many, many Bs and Ts within our community! She can't even get her fucking Ts right, much less any mention of Qs.

After hearing such snide words and spending some time clicking through AGLCC and Austin Pride's websites, I can safely say that I can't find much that highlights the amazing depth and breadth of Austin's queer community. For as much as both organizations like to pay lip service to the diversity of the city's LGBT community – Transgender Education Network of Texas is this month's Featured Member on the Chamber's homepage – I see a whole lot of finely coiffed L-styles and G-styles: which is fine, I guess. But it's not representative. Not of me, not of my friends and loved ones, and not of many, many people who call Austin home.

I went to this AGLCC meeting out of a genuine interest in knowing how Pride is organized and how festival decisions are made – I just like knowing how things work. And as someone who is queer and lives in Austin, I have a deeply vested interest in who is presenting the public face of our community.

This is a call to arms, Austin. QueerBomb is a chance for us to get it right. Not just our Ts and Qs, but all of it. This is our moment to say, Try as you might, you cannot buy my Pride. You cannot push me out of my community.

Bearracuda Is Back - A Weekend Full of Fur
Austin's bear community throws down all weekend at Bearracuda. Split Pride, Unified Chronicle
Much love to Chronicle staffers for having the Gay Place's back.