Barbarella and TheGlitoris.com bridge the straight nightlife area with a gay-themed weekly evening.

I first heard of TheGlitoris.com on Twitter and embarked on what would become a recurring joke with my friends and me. For the first few weeks, I was convinced that whoever was behind The Glitoris' Twitter handle was the nastiest (in that good, Miss Jackson sort of way) woman online. The Tweets are consistently raunchy, voiced in pure and lovely femme-skeeze. Hilarious.

Well, blow me down and snip my dick! When I found out her real identity – possessed by a shy, self-effacing sweetheart – I was hooked. On both the website and the character.

I'm not the only one. The Glitoris is a local dance blog that's reaching an international audience. Having hosted two parties at SXSW with some pretty big name music promoters, she is making a new play at Austin fame.

This Tuesday and every subsequent Tuesday, Barbarella hosts The Glitoris' TuezGayz, a weekly pansexual dance explosion.

By her own words, Miz G believes that the gay scene needs to broaden its musical horizon. And she'll be the lady to offer up the goodies.

Why just this past Friday, she booked Paul Soileau's delightfully freaky Christeene and a ridiculously awesome cast of local DJs for a show at the Independent called Azz Everywhere.

And believe you me, the azz? It was errywhur. 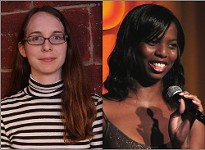 Friday Night's Alright for Dance Fighting
And if it gets a little crazy, well, hey

TheGlitoris' Top TraXXX for the Week of November 2
Top traXXX for you to get your whacks.