Why didn't they just name the new lezzie version of the Cockpit the Strap-On?

We're hoping against hope that Sister's Edge II earns a better track record than its elder sib, that used to reside at the same location on San Jacinto. The last incarnation of Sister's Edge (circa 1997) sputtered out in a blaze of protests and hurt feelings after

– according to females who worked at the bar (in letters they wrote to the editor of this here publication back in the day) – "The owner yelled obscenities at us and said he would turn it into a male country bar because we (women) could be replaced," and "a female employee who resigned ha[d] filed a sexual harassment complaint" against the establishment.

The Cockpit, or CP's, as it was also known (Lightbulb! Why the hell didn't they just name the new club The Strap-On???), was host to a few regular, if friendly, women's nights in its day, and as far as we know, these are, again, some of the same owners. It's also very encouraging to note that beloved Margie, of many area gay-bar steak-nights fame and most recently producer of Mascara at OCH, is the manager and that a delightful mishmash of local lady/etc. 'tenders and DJs are in the mix, namely RCC's Angel and Bobby and the über-enthusiastic Brenda (most recently from Rusty Spurs), who promises to whip up some of her own signature Pink Pearl concoctions in honor of her new clientele.

When I asked for a prognosis, some future clouds and radar on the outlook – of what will be Austin's first specifically lesbian bar with a chance in hell of surviving since the last Sister's Edge and that one side of Sidekicks – an anonymous source enthused: "If it's any consolation, they are booking events past January!" In any event, the Grand Opening Party is this Saturday, amid a slew of queer events going on that night, so there is no excuse to not at least check it out. Owners may have the dominant effect on what is most remembered about a club, but in the end, it is what we make it. Let's make this a good one. (See Saturday Gay Place calendar listings.)

Here's the entirity of the text of the two referenced Letters to the Editor, with links, circa: February 1998.

I'm astonished that after glaring omissions from your article about female country artists, once again, The Austin Chronicle has run a poorly researched story.

Village People: Gay Austinites Carve Out Festive Niche Downtown (1/30/98) reflects solely the scapegoat excuse of the male owner of Sister's Edge, Austin's only lesbian nightclub, as to why it no longer exists. The article states that he, as the owner of its parent bar, The Edge, "opened the sister venue last May, but discovered that the lesbians showing up at the bar were not buying drinks, which translates to the need for a `change of venue'" (to a country bar). Well, unless he sent a bartender out to the sidewalk to serve the picketers, I don't see how they could! Sister's Edge was the target of boycotts and protests after its owner allegedly, in response to complaints about the dance music, publicly made comments to a specific type group of customers informing them that he didn't want their business. As the club's former talent coordinator, I observed first-hand the dramatic decline in patronage within two weeks of this and subsequent protests in front of the club. And since then, a female employee who resigned has filed a sexual harassment complaint with the HRC. Most of this information was published in the Texas Triangle and even garnered a paragraph in the American-Statesman's XLent. I can't understand how the Chronicle could miss it.

Despite the "change of venue" to a country bar, when I stopped by to pick up the remainder of money owed to me (I ended my contract early), I counted only 18 people there on a Friday night at midnight. It is hideously detrimental to the lesbian community that The Austin Chronicle would allow this heterosexual businessman to smear our demographic as unprofitable and, instead of taking responsibility for his own controversy, discourage our chances (pun intended) of some other investor opening a lesbian nightclub here in Austin.

Sister on the Edge

A while back, I wrote a letter to you concerning the verbal abuse that we as women received at Sisters Edge by the owner. You did not print it, nor the other two letters that I sent you concerning this matter. Why, I don't know, as I was never notified. In a past issue, I read an article " Village People," Vol. 17, No. 21. In that article statements were made about how Sisters Edge owners discovered that "lesbians were not buying drinks... and that it called for a change of venue." A person opens up a lesbian bar... calls it "the best" while he yells obscenities at the women because he is the owner and you (the editor) do not even get the real facts. Read the Austin Statement. They printed the fact that there was a controversy happening at Sisters Edge, and that women were not going. It had nothing to do with lesbians not buying drinks.... Listen to the radio... check with the Queer Women's Connection when they protested Sisters Edge in October, '97. Get your facts, if you're a newspaper. I know this to be true, along with other women that worked at Sisters Edge. The owner yelled obscenities at us and said he would turn it into a male country bar because we (women) could be replaced. Why don't you have the author of the article interview me! I was there along with the other 344 women. I worked the front door the two weekends in a row that he did this, and that is why the women walked out on him and why they stopped going to Sisters Edge. For your information, Chances was not the only lesbian bar. Did you ever hear about Nexus? It just shows how much fact went into printing the article. My question is who is the person that allowed an article to be printed without getting the facts from all parties, not just men that work in these bars?

The truth would be that lesbians have never been welcomed in the guys' clubs. We have always been made to feel as if we were second-class citizens in their bars. It seems strange that you print a letter by a person who uses offensive language like the word, "sodomites," but you do not print letters that talk about what is happening in the women's community? The person that made the statement "because that's where the fags have always been?" Did you get a kick out of that? To all the women that were at the bar those two weekends I say this: Thank you for standing up to what was right and wrong and showing the owner of Sisters Edge and The Edge that we can not be replaced; it shows at the new Country Edge.

I am the Amazonian customer

P.S. Coming soon... Video tape of the protest and more on your local PBS station. 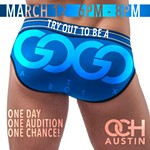 OCH Wants You… Naked
Take it off, take it all off for Gogo ATX 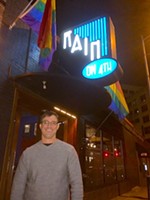