Why context matters, and why I hate your flashing penis veil.

Is this for real?

In the mid-1920s, upper and middle-class white New Yorkers would go "slumming" in Harlem. New York's mayor had a royal box in a neighborhood which was, at that point, fast becoming a highly impoverished slum. White folks would be "brave" and journey into Harlem for chills and thrills and some amazing cultural creations – the music of Duke Ellington or the hoochie-koochie dances of Josephine Bakker chief among them. Whites were served and entertained by Harlem's residents all the while believing that they were getting an authentic Harlem experience, and in a way, they were. The years of socio-economic battery, symptomatic of racialized hierarchies, were just as present in the Cotton Club as outside it. The difference was that the Cotton Club's interior was gussied up to suit white patron's ideas of black culture, and so visitors left unchallenged, believing they had dominion over the slum. They could pop in for a visit, while the residents of Harlem didn't enjoy the same in and out privileges.

At the risk of being an irresponsible historian, and of eliding racial and sexual politics (which for the sake of a usually snappy blog may be too overbearing), there is something to be gleaned from Harlem circa 1925.

I'll give you a hint: Penis veil.

Apparently after I left the Rusty Spurs last night, my friend Claudette noticed a small group of women carrying a giant blow-up penis. One woman was wearing a flashing penis veil.

Anyone who has been in/around/remotely near downtown on a weekend night knows exactly what these ladies were doing: they were celebrating the impending marriage of their friend (you know, the one with the bride's veil with cocks all over it) by getting as drunk and crazy as they possibly could (thus, the giant blow-up penis). Although, and this is an aside, if I were to ever have a bachelorette party I would want to have it over a weekend in a condo by the sea – with all of my nearest and dearest cooking for each other and staying up all night talking. I don't get the penis veil and tequila thing. Different strokes.

Claudette, having more cojones/ovaries than any queer I've met (male, female, or otherwise) walked up to the women and asked if they were out to celebrate gay pride. Claudette hoped that the women were not as clueless as they appeared to be. If they were quicker on the uptake, they would have given a queer cheer. Instead, the women got upset and immediately said, "No, we're not gay!" Claudette bluntly informed them that they should think about where and when they choose to celebrate their friend's impending marriage. To walk in celebrating a marriage in a room filled with people who aren't extended the same choice is being bratty to say the very least. To parrot an argument used against queers (esp. during Gay Pride) Why do they have to flaunt it in our faces?

Of course, they assumed that Claudette was a lesbian – the lady C didn't correct them – one of the many things I love about her.

In the midst of this conversation one of the girls looked nervously at her friends and said, "You see, I told you we shouldn't have come here!"

Claudette's story illustrates, I think, the perfect way to gently challenge the gaggles of bachelorette parties I've been seeing in gay bars as of late. Is it about getting all the straights out? Hell no! Claudette had just as much a right to be there as the bachelorette party girls, the difference is their respective awareness and thus their respect of contexts. Why were groups of wealthy white patrons slumming it in Harlem a problem? Well, they didn't indicate they were at all aware or critical of their racial and class privilege. Instead they got their kicks from seeing how "the other half" lived.

Don't get me wrong, I love bachelorette parties. Somehow gay men are usually allowed to pass through the girl's only masking tape that bars men from such events (but that's a whole other rant). What I don't love, is a group of girls entirely unaware that their celebration of marriage during Austin Pride weekend(!), their slumming in a gay bar (where they don't think they will be threatened?). Their presence serves as a painful and prescient reminder that all is not well outside of the bar doors.

Bars, if you'll recall from this week's Chronicle, were places initially created to provide community space for groups of people who didn't have safe spaces in the world. Spaces where they could dance with their girlfriend. Spaces where they could make-out in a corner. Spaces where they could just… talk, or fuck, or dance, or whatever. Gay bars may be playgrounds for queer folks, but rarely is it a playground in the same sense for straight folks. Remember this: We didn't create these exclusive spaces all by our lonesomes; we had considerable help from legal and social systems intolerant of our way of life.

Gay bars are repression's children, the people inside are timber beams forming and dissembling structures of community, love, sex, and emnity.

Claudette's response was beautiful, because for one individual in the bachelorette group, it confirmed that they shouldn't have been there, at least in that way. In the others, I hope it planted a seed. And although I doubt it will happen, I hope the bride-to-be and her besties nosh on their "confrontation" with a Rusty Spurs "lesbian" on a night that was supposed to be about fun and frivolity. Maybe when the priest/rabbi speaks of holy union, she'll really be thinking of gay cowboys two-stepping. Talk about mind-blowing.

I was gonna end this ranty entry by suggesting that straight girls wishing to party down with giant phalli and flashing penis veils abstain in the future from entering the premises. But you know, I think it should be required for all straight men and women who are about to get married to spend a night in a GLBTQ community space (bar or otherwise). The issue in this scenario is not them, but rather us. A straight woman in the Rusty Spurs did what a room full of queer men and women could not and would not do.

We have to become better teachers. 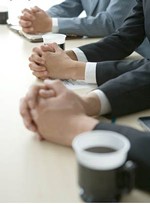 Mind Your Ts & Qs!
Crashing an AGLCC meeting isn't nearly as awesome as it sounds