A hunky man and a logo are "inappropriate" for a Gay Pride ad on Facebook??? 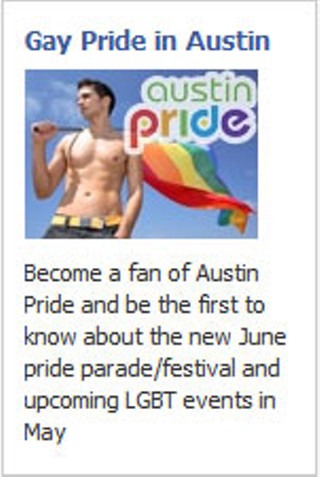 Right in the middle of a meeting I was having yesterday with AGLCC's Jimmy Flannigan and Ceci Gratias, a big grimace crossed Jimmy's face. A message from Facebook came in to Jimmy's computer. Facebook had rejected his ad for Austin Pride:

* The image of this ad is either irrelevant or inappropriate. Per sections 3 and 8 of Facebook's Advertising Guidelines, the image on your ad should be relevant and appropriate to the item being advertised. … Images that are overly explicit, provocative, or that reveal too much skin are not allowed. Images that may either degrade or idealize any health condition or body type are also not allowed. If you choose to submit this ad again, please use an appropriate image that adheres to all of Facebook's Advertising Guidelines.

Later, when Jimmy emailed me the pic of the ad, he wrote, "I DID run an ad with the same image and nearly the same text earlier in the year with much success."

What Could Be Worse Than Essie Hot Pink?
A J Crew Ad shows a mother/son painting toenails. The world falls apart.

Gay Golfer Gets Refund, But Even Gayer Golfer in Argyle Gets Denied
HRC logo placement in new Orbitz ad.