Day One. Road to the Whitehouse: Save Us, Davis!

Gay Place correspondent Dacia Saenz finally has a moment to breathe and blog about her inaugural inauguration experiences.

Where it all began. (photo by Dacia Saenz)

I started my trek to Obamaland, trudging through Chinatown in the snowy dawn, loading into a stinky bus, groggy, but thrilled. An hour later, we were stranded on the Jersey Turnpike being chastised by a cop named Bernie, who ordered us to pray that another car didn't slam us over the overpass into our death bed. He accused us of being childish and also ordered us to behave like adults.

Whoa. I hadn't even had my coffee yet.

Luckily, the crazy Aussies in the seats in front of me had other plans. After offering me a shot of Absynthe (I declined), Kat and Larry busted out into their best rendition of "Single Ladies" by Beyonce and declared our bus trip "Woodstock 2009." Wondering why our bus driver hadn't called for back-up yet, Larry decided that we were actually starring in the negative sequel to the movie Speed, our driver playing the role of "the opposite of Sandra Bullock."

At long last, our new (working) bus arrived and Officer Davis, studly, courteous and "from a different department" than ol' crotchety Bernie, guided us off the Death Star and onto our Chariot to Democracy. Larry, Kat and I shouted "same seats" like a gaggle of third graders, and we were off! The whole escapade, lasting about an hour and a half or so, was a true testament of how freakin' dreamy and euphoric everyone was feeling (excluding Officer Bernie). About the hottest under-the-collar it got was when one passenger came up to the front of the bus and told Bizarro-World Bullock he had "5 minutes to get the bus running" to which another passenger responded, "unless you've got tools, you need to sit the bleep down." Once on the new bus, we all giggled about it (including him) and chanted YES WE CAN! Together. CUMBAYA!

Finally arriving in Chinatown, I headed to Maryland on the Red Line to get dolled up in pinstripes and heels for the Latino Inaugural Gala. By some grace from La Virgen de Guadalupe, I got a press pass and would spend four hours on the red carpet with the New York Times, Washington Post, and April Woodard of Inside Edition, shooting footage of J-Lo, Edward James Olmos, Rosario Dawson, and Geraldo. (coming shortly)

I also got to interview Lonnie Jordan of War, and confirm (sort of) that yes, in fact, he had been to my grandmother's house for pozole years ago after getting stranded in Lubbock. All in all, it was a pretty glitzy affair, and the only thing perturbing me more than how badly my feet hurt, was that all the "help" were brown. WTF? ALL the bartenders, bussers, waiters, caterers… were MI GENTE. And everyone in fancy dresses and penguin suits were also MI GENTE

It was a harsh reminder that although racial barriers were being broken this weekend, classist ones were ever present. I spent the next three hours following a really bad tip that Samantha Ronson was DJing a set at an L-Word viewing party, cursing that ridiculous little liar and praying for the moment when I could finally shed the femme and get into my butch pajamas. I suppose, the Kool-Aide had worn off, and it was time to run home and fall asleep staring at my travel-size Obama effigy. 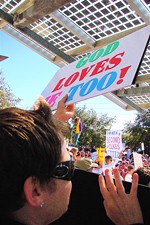 I Got Tough-Loved by a Mini Pony!
The Gay Place hangs with Brett Michaels, Pony! Poni! Pone! and Andy Warhol before the True Colors Tour show in Houston.