So what does the Pride Coalition actually do? (Spoiler: The answer isn't in here.) 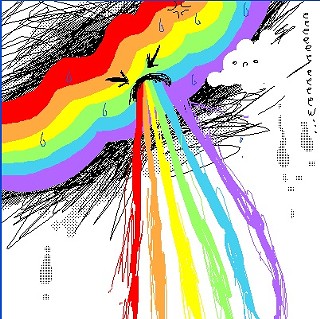 First, Equality Texas, the entity which has organized the Austin Pride Festival for as long as anyone can remember announced this year that it was handing the festival torch to the freshly formed Pride Coalition, a group composed of representatives from just about every local LGBT concern.

Take the people's celebration off the plates of a busy lobbying group to free up their time to do important things like kick ass in the Texas Lege, right? Plus there's the added bonus of having a diverse group of local queers all seated at the table together focused on one collaborative goal: To present the Austin LGBT community in all its stripes, with input from the entire community: To put the people's celebration back in the hands of the people, as it were.

Well, don't get too comfy with the concept.

Equality Texas has officially turned the [Austin Pride] Festival over to its fellow members in the Pride Coalition, which have decided to turn the task of organizing 2009's Festival over to the AGLCC. So, the AGLCC is already underway planning its inaugural sojourn into Pride Festival territory!

Of course the AGLCC is no virgin to planning Pride events, having organized the annual Gay Pride Parade for the past 7 years. But with adding the Festival to its program, that means the AGLCC will pretty much "own" Pride in Austin -- and will require a whole new approach in their event planning, promotion, sponsorship solicitations, publicity and volunteer coordination. Are they up to it?

Are they? I could not, nor would not attempt to argue that point either way in this limited forum here.

The question here really is, "Should they?" Now, I do have an opinion about that.

Did I read correctly? AGLCC is going to "own" Pride in Austin???

The one thing that Austin's LGBT community has lacked (other than a neighborhood… oh, and a lesbian bar) is a Central Pride Committee. Is it really in the interest of our community to relegate an undertaking like Pride, which purportedly represents all of us, to one small organization?

And don't think we aren't curious, especially in light of today's news. Please, someone tell me: What does this purported Pride Coalition actually do?

You can be sure there will be more blog posts about this in the very near future.