aGLIFF: Up With Dead People!

Andy at the movies: Edge of Heaven and Otto. Edge of Heaven (Faith Akin, 2007) was the perfect choice for an opening night film at the Austin Gay and Lesbian International Film Festival. It showcased some of the strengths of this year's award-winning program – a strong international representation paired with powerful characters and storylines that aren't in the slightest derivative. At this year’s Cannes Film Festival, Edge of Heaven won best screenplay, and deservedly so. The film plays out the connections (both real and missed) between an ensemble of Turkish and German citizens: A revolutionary, a university student, a prostitute, a bookstore owner. Each turns to another for comfort, security, love – and sometimes find their needs left unfulfilled.

The "gay connection" was not the focus of the film, which was, quite honestly, refreshing. Instead, the relationship that develops between the young Turkish revolutionary, Ayten (Nurgul Yesilcay) and her university student girlfriend, Lotte (Patrycia Ziolkowska) is but one of many complicated and provocative relationships.

Unlike other films that use serendipitous incidents as a crux (evoking that “It’s a small world” mentality), Edge of Heaven instead meditates on the simultaneity of experience. While one character searches for her mother, another is becoming, perhaps unexpectedly, closer to knowing his father. These are characters that are richly developed and easy to care for. Most importantly, almost every character finds love and fulfillment of a sort, even if their lives are cut short. The plot is filled with many twists and turns, although in a Brechtian move the major events and character deaths are given to us in title cards before each of the three segments begin. Needless to say, the film provides no easy answers to the human relationships contained therein. Instead – we are left waiting, while the credits role.

But if Edge of Heaven was deeply involving – then the final screening of Wednesday’s program was a perfect salve. Otto; or, Up with Dead People (Bruce LaBruce, 2008) concerns a young gay German zombie, Otto (Jey Crisfar) stumbling his way through the afterlife. And I do mean stumbling: About 50% of the film is Otto hobbling from place to place, alone. It gives the film a melancholy feel, and gives Otto a certain simpatico – even while he's eating the entrails of small woodland creatures. He's a lonely hobo Zombie. Unlike any other Zombie flick, LaBruce exploits the revolutionary potential of the un-dead: Zombies are nature’s way of getting back at a world driven to destruction by late capitalism, and homosexuality becomes part and parcel of this outlaw status. Honestly, in LaBruce’s hands, it makes a strange sort of sense that zombies would be gay. It's a final and horrific middle finger to the living status quo.

What is most impressive about Otto, is its potential appeal to a wide range of audiences. For fans of LaBruce's past porny work (raising hand) there certainly were trashy gay movie moments. The dose of heavy Marxist critique should please the academics in the audience (raises hand). And underground film nerds (yet again, raises hand) would love Otto, as one of the characters is based on Maya Deren – the character’s name: Medea Yarn. Horror film fans will also find much to adore in Otto, including an orgy scene intercut with slabs of meat that would make Carolee Schneemann blush. More than Otto is about eating brains (in fact, there really isn’t any brain-eating at all – it’s all entrails and bowels – how colonic!) it is actually about disaffected gay youth. And who doesn't love the disaffected gay youth? WHO?!? 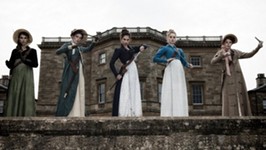